2017 Ford GT Starts Its Production Line: Here’s Everything We Know About Ford’s Supercar 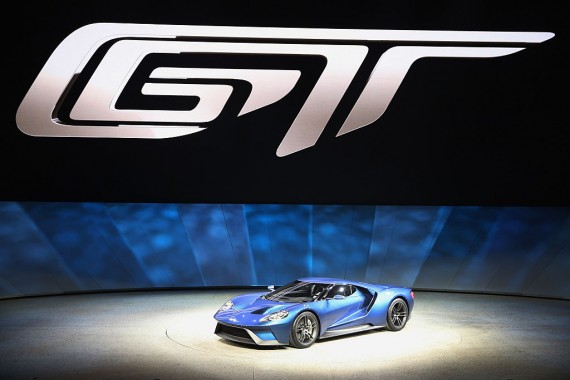 The legendary Ford GT is now set to go for production and have set their production line to be scheduled sooner than we think. Ford Chairman Bill Ford gets exclusive rights to the first car. (Photo : Photo by Scott Olson/Getty Images)

On Friday, Ford Motor Company announced that the first examples of the new 2017 Ford GT are already complete and would start delivery to its customers before the year ends. Ford chairman Bill Ford Jr. and Ford CEO Mark Fields gets the first and the second car, respectively. Ford did not reveal the color finishes for the two cars, yet.

1000 Ford GT's Will Be Available For The Next Four Years

Ford Motor Company have high hopes for their flagship car and stated that it will be in production for at least four years. 250 cars would be produced for the first two years and would most likely remain constant for the last two years, having a total of approximately 1000 production cars up for grabs within the targeted four years of production. Despite having a base price of around $400,000 dollars, more than 6000 individuals have already applied for the first 500 production cars. That massive amount of interested buyers is not a big surprise given the craze of automobile collectors.

Even before production, the new Ford GT has already proven itself by winning the 24 Hours of Le Mans challenge in the GTE Pro Class, which is exactly 50 years after the ever-famous GT40 also had an overall winning at the Le Mans. A winning credential that is an added bonus to the car's sleek and splendid design. Multimatic, a Canadian Motorsports and engineering outfit that is based in Markham, Ontario, is handling production for the 2017 Ford GT.

Most car manufacturers are now moving back to smaller engines in an attempt to save energy without compromising its power. This is the same with Ford when they gave the consumer Ford Fiesta a tiny 1.0liter Ecoboost engine and the Ford Mustang a 2.3liter four-cylinder Ecoboost engine. The 2017 Ford GT will, of course, not get an Ecoboost engine, but it gets a V6 instead of the typical V8 engine. Although being smaller than its predecessor, the new twin turbo V6 engine is still capable of putting out more than 600 horsepower to its rear wheels. It would still come in a mid-engine platform with the sleek aerodynamic body design. A seven-speed dual clutch transaxle would be equipped to the transmission.

The GT Still Gets A Sleek And Aerodynamic Design

In addition, the 2017 Ford GT features advanced construction that maximizes that use of carbon fiber in the body and panels. The front and rear sub frames will be made out of aluminum. The new car will also be fitted with active aero kits like a deployable rear spoiler. This quick machine would be fitted with carbon ceramic disc brakes for optimum stopping power.

The Interior Gives The Expected Racing Feel From A GT

As expected with a GT, the cabin would be small. The doors still swing upward and well-bolstered racing seats that are built right into the body can be seen on the inside. Fortunately, the steering wheel and the pedals are adjustable to help the driver get the most comfortable feel out of the experience. The digital instrument cluster is also programmable for multiple driving environments. The 2017 Fort GT will also feature an F1-style steering wheel with controls to allow a breezy access to the paddle shifters.

Mercedes-Benz Just Revealed the S-Class Night Edition Coupe, Will Be Unveiled At The Detroit Auto Show

The much-awaited Detroit Motor Show, also known as the North American International Auto Show, is just around the corner. Car brands like Mercedes-Benz are announcing what vehicles they will unveil at the show.

Alfa Romeo Giulia Finally Goes Stateside: How Will It Match Against Other Car Brands

Italian car brand Alfa Romeo introduces the new Giulia to the United States. Will their new 350 horsepower sedan be able to beat the likes of BMW, Audi, and Mercedes-Benz?

Lamborghini Murcielago Just Got Destroyed In Front Of Its Owner

A Lamborghini Murcielago was just crashed publicly and in front if its owner. Reason being that the supercar was illegally imported to the country. The Murcielago was crashed despite appeals due to Taiwanese laws.

Ford Equips Mustang And F-150 With The Pedestrian Detection System

Safety is being added in vehicles each year. For Ford, that means improving on its Pedestrian Detection System, which will go into the 2018 Mustang and F-150.

The Ford Fiesta ST 2018's general features have been revealed prior to official unveiling.

2018 Ford Mustang Will Have A Facelift: Changes Revealed