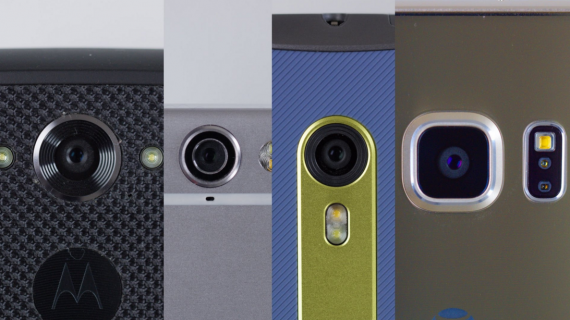 The camera on smartphones continues to get better and better, thanks to al competitive handset makers. Before the end of 2016, let us find out what tops the list on having the best camera. (Photo : Marques Brownlee / YouTube Screenshot)

2016 marks as one of the most competitive year for all smartphone makers. This year also saw the beginning of many interesting camera setups on mobile devices.

Some of the camera smartphones make it on top for being as good as DSLR, and some need more improvement especially when taking pictures in the dark. For you to sum up all the best camera smartphones of 2016, you have to test each of the handsets. It's a hassle! So to make it easier, I made a list for you to read.

Are you a photography enthusiast? Are you looking forward to buying a new smartphone that can also be your tool for your photography life? According to the Economic Times (ET), here is the curated list of the 5 best camera smartphones of 2016 that you wanted to see.

Apple iPhone 7 Plus is the first-ever iPhone to have the dual 12MP camera modules at the back. Aside from that, it also offers a Portrait Mode that helps users to blur backgrounds to focus attention on people or objects in the foreground, replicating an effect typically limited to larger SLR cameras. Its focus subject is very clear while the background is blurry to give emphasize on what is really the center of the camera.

iPhone 7 Plus has the extra 56 mm lens, which doubles the focal length of the original 28 mm glass. This means that when you use iPhone 7 Plus, you have 2x seamless optical zoom. This can be extended up to 10x using and additional gadget. According to PCAdvisor, iPhone 7 Plus is one of their top picks to have the best camera smartphones.

Samsung's Galaxy S7 edge flagship smartphone has a 12 MP rear camera with LED flash. It comes with Dual Pixel technology and has a bigger aperture size of f/1.7, along with larger pixel sensors. These enable lightning fast focussing for all the pixels.There is also a 'Pro' mode in the camera app that enables users to control shutter speeds and ISO values.

For Android Headlines, both the Galaxy S7 and Galaxy S7 Edge are tied here for second place because they have the same camera and camera software. Samsung Galaxy S7 family is a pretty big upgrade this year in just about every category, and it still has an amazing camera.

As I reported last October, Google Pixel XL is considered as the best android smartphone so far. The camera in the Pixel XL is one of its top features. It has a 12.3-megapixel rear camera and an 8-megapixel front camera. This rear camera is paired with an F2.0 lens and electronics image stabilization. But the reason why it is so good is its large Sony-made IMX 378 image sensor. This sensor, due to its large pixel size and relatively large physical size, captures lot more data and light.

The camera performs exceptionally well in brightly-lit conditions. Consequently, daylight shots come sharp and full of detail. One of the impressive things about the Pixel XL's camera is that it does a great job of stabilizing jerky videos, despite not having Optical Image Stabilization, according to ET.

If you take a lot of impromptu shots, the OnePlus 3T’s camera app can be quick-loaded with a double-tap of the power button, as tested by Recombu. "You can toggle the flash, HDR and HQ (quality) modes there on the main screen, and manually focus with a tap of the viewing window. Manually focusing also allows you to mess around with the brightness levels, as with most camera phones."

ET said that the camera of the Motorola Moto Z focuses really quickly and shutter speeds are quite fast as well. Captured photos have ample amount of resolved detail and are quite vibrant. Motorola Moto Z, according to Droid Life, is with a 13 MP camera (1.12um pixels), f/1.8 aperture, optical image stabilization (OIS), laser autofocus, and supposed zero shutter lag. The camera is capable of taking pictures in both auto and “Professional” or manual modes, is launched like other Moto phones via wrist-twisting gesture, has burst and night modes, and can record both 4K and slow-motion video.

If you're really looking to buy a new smartphone, now is the time to do it. Now you have the idea to select based on the camera feature of each flagship. Great timing! There are a number of holiday discounts for this year's phones, and there won't be any more major phone announcements until Mobile World Congress in March.

Here is the download link for the leaked Android Oreo firmware for OnePlus 3T devices.

OnePlus has issued an over the air update (OxygenOS 4.1.7) to the OnePlus 3 and 3T with the August security patch and some fixes and optimizations.