Self Driving Cars Don't Need To Look Like A Robot: Meet The Ford Fusion Hybrid 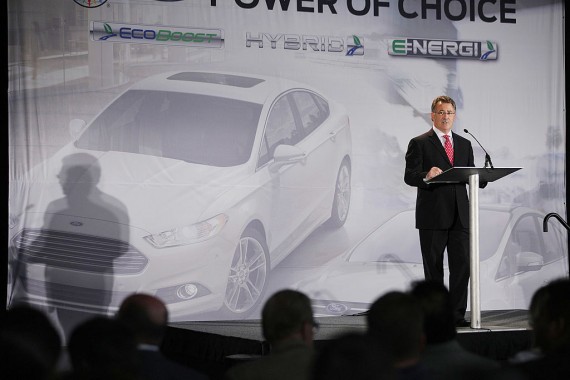 Ford Motors may have found a way for their self-driving cars not to look hideous. Most autonomous cars in the market today are packed with lidars, radars and sensors that somehow makes the vehicle look like Frankenstein's monster. With a number of equipment on the sides and on the roof that makes the vehicle nowhere near being discreet. Ford recently released photos of the new self-driving Ford Fusion Hybrid that looks like just an ordinary car.

The Ford Fusion Hybrid Is More Capable Than Ever

The Ford Fusion Hybrid uses a more capable computer and is equipped with better-integrated sensors. The new vehicle also utilizes an upgraded version of the Fusion hybrid platform. According to Ford, the self-driving Ford Fusion Hybrid is nearing its production stages and is almost ready to hit the market with its low profile Lidar units.

Cameras And Sensors Are Now Incorporated In The Roof Design

Ford made the cameras and sensors as discreet as possible by building them directly as a part of the roof. The integration of the sensors, cameras and lidars to the roof resulted in a regular looking car with self-driving capabilities, without the bulky devices mounted on top. They utilized the roof racks to hide the sensing devices and only what looks like a camera can be seen protruding outside near the driver side.

Ford installed the big computer in the trunk to maximize the use of space. The powerful computer is capable of processing up to one terabyte of data in an hour for navigation, artificial intelligence, computer vision and object recognition. Ford's well-planned design resulted in a vehicle that may be able to go head to head with expensive Tesla's designs.

Aims To Be A Level Four SAE Vehicle

Ford said that the new self-driving Ford Fusion Hybrid is one major step towards their SAE level four capable vehicles and is set for high volume production by 2021. Level four SAE autonomous vehicles is a category for smart cars to be able to operate in certain locations such as college campuses, whereas a level five SAE autonomous car can operate itself anywhere without any location restriction. Ford plans to test 90 of its Fusion Hybrids in Arizona, Michigan and California.

Self-driving technology has truly come a long way from when it started. Cars are becoming sleeker and looking less distracting to other road users. Autonomous cars are on their way to really becoming a representation of an artificial intelligence with features that allows it to decide on its own. Features such as the autopilot system make the vehicles a lot safer compared to human beings. They have the ability to decide in split seconds and avoid the most fatal of crashes.

For now, most state laws still require an operator or a driver to be positioned behind the wheel of autonomous vehicles. The operators will be able to take charge of driving whenever needed or in cases that the autopilot system fails. However, with the advancement of technologies and companies such as Ford that are dedicating their development to the advancements of self-driving cars, it would only take a matter of time before our streets are a much safer place with these cars driving us around.

Uber, who recently had altercations with the California Department of Motor Vehicle, was left with no choice but to pull out their cars from the streets of San Francisco, California.

Consumer Reports have already released their yearly owner satisfaction survey. Owners have spoken and Tesla leads the list, while Fiat falls to the bottom.

One dilemma of EV owners is the inability to go on long distance trips. More states are showing support by collaborating with companies to make long distance travel a possibility for all electric vehicle owners.

Ford's black employees have requested that the car manufacturer to stop the production of police cars.