A Surround Sound Speaker You Can Wear Around Your Neck? Why Not, LG Says 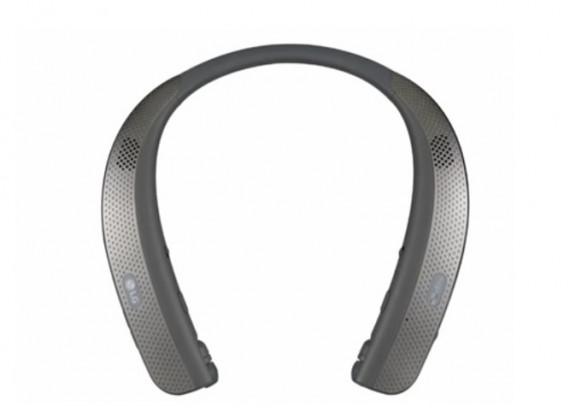 Back in the 80's, people walked around the streets carrying giant boxes that blurted out music on their shoulders or heads. Think khaki trench coat-wearing and boom box-carrying John Cusack in "Say Anything".

Nowadays, everything is tiny. Phones have gotten smaller and thinner though the current trend it seems is that it's getting some size back in the form of phablets. Gigantic computers that occupied a whole room have now shrunk into tablets or something even smaller. Boom boxes became iPods and now, MP3 or MP4 players are gone as well.

The huge speakers became smaller and smaller. Now you can even wear one.

The LG TONE Studio is the latest wearable tech from the Korean company. This device along with the TONE Free earphones and other devices are set to be unveiled in the coming CES 2017, according to PC Mag. LG News Room also reported that LG will be announcing new Bluetooth headsets in the TONE Infinim with LG's Metal Layer Speaker Technology, and the TONE Ultra which was developed with the help of JBL. There's also the TONE Platinum, TONE Active+, Tone Pro and LG Force.

The wearable speaker boast of having four speakers including two full range ones on the top and vibrating ones on the bottom. The position and vibrating movements give the surround sound sensation to the user which is made even better by the fact that LG collaborated with DTS, one of the leading companies specializing in digital surround sound.

Aside from that, the TONE Studio also has a Hi-Fi DAC or Digital to Analog Converter so audio content will sound as accurate as possible. It is also possible to connect two TONE Studio speakers to give a room the theatre-like sound effects while watching a movie.

"LG has a rich legacy of innovating in the wearable audio market, and our products have become the standard by which all other earphones are judged. We are committed to leading the way in this fast-moving market by developing exciting new products which appeal to every music-loving and convenience-seeking individual."

The LG Tone Studio wearable speaker is anything but appealing. It looks like someone played a game of Horseshoes with your head. While it is more portable and handier than carrying a boom box, it still makes one look foolish. And with 80's fashion making a comeback this year, maybe it's not a bad idea to brush off the dust and lug around that boom box I have kept in the attic all these years.

And that's just the aesthetic aspect of the device.

With music or noise (depending on the genre) blaring from your neck aka VERY near your ear, it is high likely your sense of hearing is compromised. Imagine someone was foolish enough to use this thing while driving around? Though it is a hands-free gadget, it still takes away at least one of the five important senses.

With the specs and features described above, the sound quality will surely be off the chart. It is a great buy if you intend to use it at home where no one else can see you.