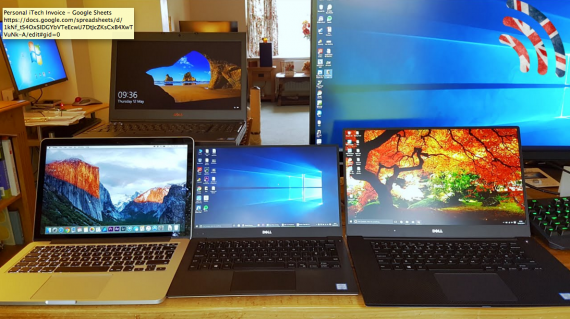 Here are the best laptops and tablets you can expect from the CES scheduled for January 5 to 7, 2017, in Las Vegas. (Photo : The Tech Chap/YouTube Screenshot)

The Consumer Electronics Show (CES) is scheduled on January 5 to 7, 2017, in Las Vegas. This year is also the conference’s 50th anniversary and there are many things to expect from.

CES 2017 has given a leg up to some of the best tech gadget in the last half-century. It includes the first ever video cassette recorder in 1970 and the first Xbox in 2001.

Best Laptops And Tablets To Expect on CES 2017

Dell has already confirmed that the company is working on a convertible version of its Dell XPS 13 laptop and will announce the new device at CES 2017 in January. Dell said that the new 2-in-1 (laptop-in-tablet) will have the same InfinityEdge display as the existing XPS 13 and XPS 15. This means you can expect a nearly bezel-free screen from Dell, once again.

The company also said that it's planning a convertible version of the Dell Latitude 13 business laptop, which will be unveiled at the same conference. Another also reported that Dell also plans to unveil its vision for the future of desktops. Rumors suggest that the company will unveil Smart Desk, a PC with a second screen and a peripheral. It's basically Dell's promising computer over the Microsoft Surface Studio and Dial.

Lenovo's announcing nine new laptops and mostly updates to the existing ThinkPad line. These all have "the latest Intel Core i processors" and are equipped with a Precision Touchpad, MilSpec durability, and bloatware-free Windows 10.

The laptops are as follows:

Even before the CES 2017, LG has announced its latest monitor range. It hasn't shared the complete details yet, however, as it plans to reveal that news at CES. The highlight is its LG 32UD99. It is LG's very own laptop that has a 32-inch 4K display with HDR10 standard compatibility. It will display 95 percent of the P3 color gamut. It also comes equipped with USB-C support.

Aside from that, LG will also be releasing a floating speaker at CES 2017. The Bluetooth speaker has a subwoofer in the base, 360-degree sound, and electromagnetic levitation. According to TechRadar, LG isn't the first to attempt a floating speaker, so hopefully, this will be a higher-end solution.

Xiaomi has confirmed that it will be at CES 2017 and its gonna be their first time ever. We know that Xiaomi has a broad range of products makes, there’s a strong possibility that a laptop or hybrid or even tablet could be announced. However, it did just launch the Mi Notebook Air and Air 13 Pro this past summer.

Aside from laptops and tablet, or a hybrid gadget, according to Beta News, Xiaomi will unveil Yi Erida drone, Yi 4K+ action camera at CES 2017.

LeEco CEO Jia Yueting took to Chinese social media site Weibo to confirm the company will be at CES 2017. It recently launched in the US and shortly after that it announces that the company will be seen at the conference. Yueting’s post featured a number of LeEco products, but it was removed soon after and LeEco hasn’t said why.