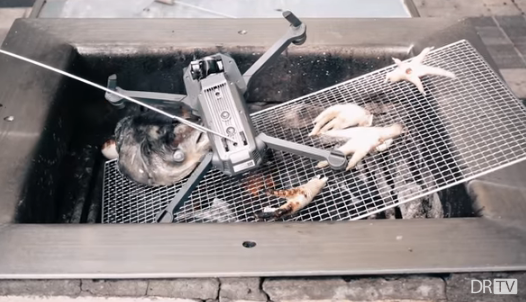 DJI has released a number of new drones this year and while the company was able to produce drones of different kinds and levels, it is probably the Mavic Pro that got talked about more this year. (Photo : DigitalRev TV / YouTube)

DJI has released a number of new drones this year and while the company was able to produce drones of different kinds and levels, it is probably the Mavic Pro that got talked about more this year. The best thing about the DJI Mavic Pro is that it seems to be perfect for everyone. Whatever you want to use it for, it seems like an amazing drone for it.

With DJI drones' ultimate intelligence, some might assume that these drones can't deliver when it comes to durability. However, as per the recent torture tests done to the Mavic Pro by DigitalRev TV, it looks like the drone has been made to survive anything. It's kind of surprising for a compact drone actually.

DRTV has put the Mavic Pro through an ultimate torture test and as a summary of the results, the drone survived big time. Basically, the drone is strong enough to balance despite having stuff thrown at it. In fact, the Mavic Pro will continue to hover and fly in place unless it got hit "right" and get knocked over. If so, it can get out of balance and drop. Nevertheless, the drone still works perfectly after dropping unexpectedly.

The DJI Mavic Pro has also been put through a heat test and as surprising as it may be, it still works. Additionally, people may think that water damage is the Mavic Pro's ultimate downfall. Apparently, it isn't. When DR TV subjected the drone to a heavy rain test, the DJI Mavic Pro was able to last minutes of flying before eventually dropping to the ground. Nevertheless, after drying up with the help of rice, the drone magically came back to life and worked properly, even the camera seems damage-free.

Know that the Mavic Pro is a very intelligent drone. Actually, all DJI drones generally are. The only difference the Mavic Pro has over its siblings is that it is pretty compact in size. Nevertheless, it is able to fly without any hassles and it can avoid collisions without so much effort from the user.

The Mavic Pro has the follow-me mode, obstacle avoidance feature, Terrain Follow feature, subject tracking mode, sport mode, gesture more and tripod mode. On top of that, this drone also has the precision landing system. Technically, the Mavic Pro is quite advanced but despite that, it is very user-friendly. Every beginner's fear is to drop the drone or subject it to collision. With the Mavic Pro's uber-intelligent system, these things are not likely to happen.

Generally, the DJI Mavic Pro is one of the easiest drones to fly. Digital Trends also say that it has an outrageously long range. Furthermore, it is easily controlled. Sure there are cheaper drones on the market, but they are quite far from the Mavic Pro when it comes to overall quality.