Samsung Galaxy S8 Vs Xiaomi Mi 6: Battle Between The Phones Of The Future 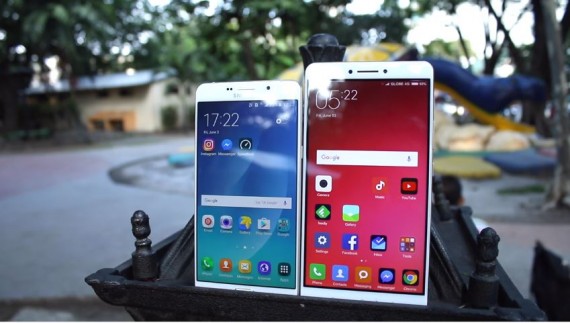 The Samsung Galaxy S8 and the Xiaomi Mi 6 Mix are both expected to roll out this year. With the two phones being closely compared to each other, it makes a lot of sense to compare the two and see which of which will the consumers prefer the most. (Photo : Manila Shaker Philippines/YouTube)

Xiaomi has made strides towards outshining Samsung in its own Home turf, as the tech giant is looking forward towards the launch of the Xiaomi Mi 6 Mix. Samsung, on the other hand, is looking to outduel Apple as the world's leading smartphone manufacturer.

If everything goes according to speculation, the Xiaomi Mi 6 Mix will be going up against the upcoming Samsung Galaxy S8 in a battle between the phones of the future. Here are some comparisons between the two handsets that you can ponder on.

In terms of retail price, Xiaomi smartphones are already known for its affordable price and it is rumored that the Mi 6 Mix is going to be around $370-440. The Samsung Galaxy S8 on the other end is rumored to cost about $810.

The Xiaomi Mi 6 Mix is reported to feature a bezel-less front with a 100% screen-to-body ratio. It will also sport a retractable front camera and a software-based home button, along with reports that it could possibly have a fingerprint scanner as well.

As per recent reports, the Samsung Galaxy S8 will be ditching the 3.5 mm jack. It will also have curved edges and a bezel-less screen with an edge-to-edge display. However, unlike the Xiaomi Mi 6 Mix, Galaxy S8 is said to only have 90% screen-to-body ratio.

The Xiaomi Mi 6 Mix will be having two variants of memory combination. One will be a 256GB model with 6GB worth of RAM and another is 128GB with 6GB of RAM. The Samsung Galaxy S8, on the other hand, is also going to have two variants as well, with 64 and 128GB internal memory and coupled with 8GB of RAM.

In terms of camera, the Xiaomi Mi 6 Mix will feature a 16 MP Dual-LED flash rear camera and an 8 MP front camera. The Samsung Galaxy S8 will be featuring 2 rear cameras: a 13 MP and 12 MP variant. As for its camera features, fans are hoping that it will be a lot more powerful than its predecessors.

Charging and Other Features

The Xiaomi Mi 6 Mix is said to feature wireless fast charging features that are capable of charging from 0 to 60 percent within 30 minutes. The Samsung Galaxy S8, on the other hand, is said to be featuring wireless headphones, wireless charging, the possibility of an S Pen inclusion, and two AI voice assistants called Bixby and Kestra.

Apple would release its 10-Year Anniversary 'iPhone 8' this coming 2017. However, Samsung is reported to help its rival by serving as its supplier.

Samsung's up and coming flagship smartphone, the Samsung Galaxy S8 is highly anticipated to be one of the fastest smartphones that will hit the market. This was after rumors have confirmed that the said smartphone will be sporting 8GB worth of RAM. The Galaxy S8 will be unveiled next year, sometime in April. However, several details regarding the smartphone have already started leaking online.

The Kaby Lake is Intel's next generation of CPUs which brings outstanding upgrades for many present and future computers, of which Intel with introducing more details and information during the upcoming CES 2017. And while most computer systems are currently in the Intel Skylake generation, Samsung has just improved and revamped its Notebook 9 lineup with the Kaby Lake processors.

Samsung has enhanced and improved its Notebook 9 laptops, making them lighter and powering them with the powerful Intel i7 Kaby Lake processor. The South Korea-based company recently unveiled the specs of the revamped model right before the Consumer Electronics Show (CES) that will be held in 2017 in Las Vegas. Samsung has also claimed that that the 13.3-inch version of the Notebook 9 is going to be the lightest version, as well as being the lightest laptop available on the market once it rolls out. With that, the Samsung Notebook 9 is set on being the most portable and convenient laptop that anyone can have once it officially rolls out.

The competition between Samsung's Galaxy S8 and Apple's iPhone 8 next year is going to be epic in the smartphone industry. Samsung is looking to bounce back and gain people's trust again after it's tragic Note 7 failure. Apple, on the other end, is looking to get back on track with yet another major smartphone refresh. With all things said, here are some head-to-head comparisons between the two upcoming juggernaut handsets.

The Damages Caused By 'Galaxy Note 7' To Samsung, How Severe Is It?

2016 was a very tough year for Samsung. Thanks to the exploding battery issues with the recently discontinued Galaxy Note 7, Samsung was forced to issue an expensive global recall to compensate for the problem. The solution didn't work so well and a second recall was initiated, along with the production of the handset ending. The Note 7 was projected to be one of the biggest-selling smartphones of the year. Instead, it became a major problem that Samsung had to discontinue it once and for all.

What Is The Samsung Galaxy S8 'All-Screen Design'?

One of the biggest questions of 2017 will be how Samsung recovers from its disastrous Note 7 failure, and Google's triumphant Pixel launch this year. It seems that the company's direct answer is to push the boundaries of design with the next upcoming Galaxy S flagship phone, which, according to reports, will be featuring an "all-screen" design.

Will The Samsung 'Galaxy S8' Imitate The 'iPhone 8' Design And Functionality?

According to several online reports, Samsung could potentially follow the Apple's paths and be on the verge of planning to ditch the headphone jack on its upcoming Galaxy S8 smartphone. If so, it would definitely force users to adopt to wireless headphones, or potentially utilize a USB Type-C compatible pair, if that's what the new handset will use for charging.