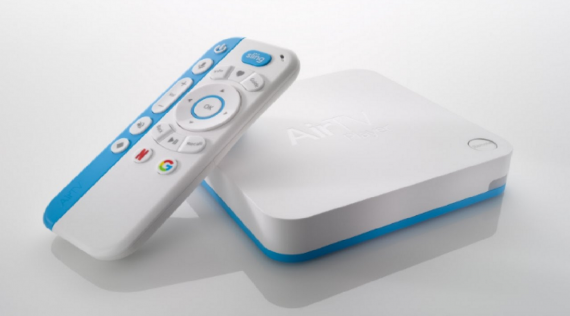 Dish TV is using Google’s large screened OS to power the AirTV Player at CES 2017. It is a single streaming device that combines the local over-the-air (OTA) channels, on-demand streaming on Netflix and Sling TV and other internet video services.

To start the CES 2017 schedule, Dish TV unveiled a new set-top box called AirTV that’s powered by Android TV and might be the perfect option for cord cutters who stream almost every show. The streaming box comes preloaded with Sling TV, Netflix, YouTube as well as the access to apps on Android' Google Play. It also comes with an optional OTA antenna for free local channel access.

According to 9to5 Google, the AirTV Player can stream up to 4K Ultra-high definition (UHD) with the highlight feature of the small blue puck as the remote. The box also features a dedicated ‘Find your remote’ button on the face to beep as a signal and light up the dual tone controller if you accidentally lose it.

As a universal remote for the AirTV Player, TV, and any other home entertainment device, the controller features a microphone for Android TV’s own standard voice search. Besides, the standard D-Pad and the volume controls, there are shortcuts to a TV guide, favorites channels and dedicated Netflix and Google buttons.

Since Dish 4K AirTV is an Android TV box, you can install whatever apps you want as long it is available in the Android Play Store. But the preinstalled options are Sling TV, Netflix, and YouTube, according to The Verge.

AirTV, according to TechCrunch, resembles a small, blue and white Apple TV. It also has a remote with built-in voice input which is a nice pair for Android TV itself. The remote and the box combined have a kind of toy-like feels and look as a result of Dish’s design choices, but physical appearance isn't everything when it comes to this kind of device. As long as it is considerably ok to use, it will definitely gain user's loyalty.

The standalone box is available for $99 today and it includes $50 of Sling credits. To get the local OTA channels, users must need to buy an adaptor which is available as a $129 bundle.

The AirTV Player could lessen a major hurdle for Sling TV and the other competing services like PlayStation Vue which has negotiating agreements to carry live programming from broadcast networks such as ABC, CBS, Fox, NBC and their local affiliates across the country. This has proved doable in businesses where the networks directly own and operate the local channel, but elsewhere in the US, it can be harder and more time-consuming to work out deals.

This is a workaround for that trouble and hassle, at least for owners and users who are interested in spending the money on what seems like a very decent streaming gadget.

Google Search Now Knows What You Want To Watch Next: How Does It Do That?

Bored at home due to coronavirus stay-at-home policy? Let Google help you decide what to watch next on whatever streaming platform you.use

This new app is a Samsung exclusive, which means only the company’s own devices will support the app. Those interested and carrying a supported device can go ahead and download the app straight from the Google Play Store.