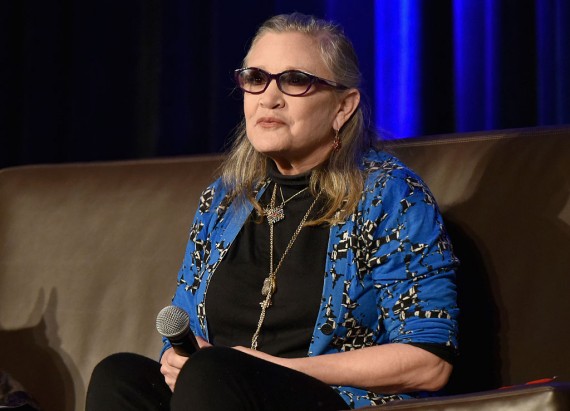 "We have been given a challenging illness, and there is no other option than to meet those challenges. Think of it as an opportunity to be heroic - not 'I survived living in Mosul during an attack' heroic, but an emotional survival. An opportunity to be a good example to others who might share our disorder. That's why it's important to find a community - however small - of other bipolar people to share experiences and find comfort in the similarities," this was Carrie Fisher's response when someone asked her a question about manic depressive illness in her last advice column published in The Guardian.

Carrie Fisher has always shed a positive light in promoting better understanding of mental illness. Fans were devastated to hear Fisher's sudden death from a heart attack. And even after life, the "Star Wars" actress has left a strong legacy about her advocacy on protecting and understanding people suffering from depression, bipolar disorder, and addiction.

"Have you found a way to feel at peace when even your brain seesaws constantly? I can't see very far down the line from here and I hope that you can give me some insight," someone named Alex asked Fisher in her last "Ask Carrie Fisher" advise column published in Nov. 30.

"Her honesty about her mental illness gave many people hope," said Natasha Tracy, mental health blogger and author of "Lost Marbles: Insights into My Life with Depression and Bipolar."

Tracy describes Fisher's openness about her bipolar disorder. This brings a spark of hope for people suffering the same illness. This shows them that it is possible for them to achieve their dreams and goals even with the disorder.

"There's a feeling that all you are is the disorder. You can feel like a freak, like you're the craziest person in the whole world and then someone comes out and dramatically talks about having bipolar disorder. You can start seeing your own experiences echoed in someone you really identify with," Tracy said.

According to Fisher, she was diagnosed with the bipolar disorder at 24. She had difficulty accepting her condition until her late 20s when she survived a drug overdose and alcohol addiction.

Her best-seller "Postcards from the Edge" and her other books tells us about her mental health journey. Fisher admitted to having been treated with Lithium and failed. Her treatments further included electroconvulsive therapy to treat depression.

"When I give talks one of the things I generally do is to put up a picture of Carrie Fisher because everyone recognizes her face as Princess Leia," Tracy said. "Then I tell them she has bipolar disorder and it's almost like the crowd gasps when they hear it. They think that no normal or successful person could have such a severe mental illness."

6 million people or 2.5 percent of Americans are currently diagnosed with bipolar disorder.

Fisher's death has been a great loss to many. The big screens may miss her but her legacy will forever be remembered.

As Fisher's closing words in her column says, "Move through those feelings and meet me on the other side. As your bipolar sister, I'll be watching. Now get out there and show me and you what you can do.

Everything You Need To Know About Bipolar Disorder And Lying, Could There Be A Link?

How Could A Mental Illness Such As Being Bipolar Affect A Person With The Way He Lies? What Are The Hidden Impacts Aside From Lying? Find Out What Experts Say

In relation to Carrie Fisher death cause, people still tend to hide problems with mental health.