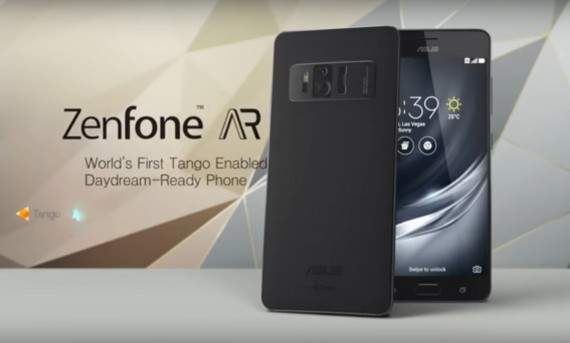 The Samsung Galaxy S8 and Asus Zenfone AR are 2017 smartphones that features 8 GB of RAM. However, where Samsung pushes a more futuristic look and faster processing capabilities, the Asus Zenfone focuses on the augmented and virtual reality pool coupled with above average specs. Which smartphone will people find more attractive? (Photo : Official Phone Commercials HD/YouTube)

The Samsung Galaxy S8 and Asus Zenfone AR are smartphones that are getting a lot of attention, specifically about it 8 GB RAM storage. But between the 2 smartphones which is more powerful?

The Price And Release Date

The Samsung Galaxy S8's price tag is a guessing game that many leaks and sources are trying to figure out. In the initial reports, it was believed to be around $810-850. Now, recent reports are claiming it to be 15-20 percent more expensive than the Galaxy S7 or possibly around $750. For its release date, recent reports suggest that it will be likely released on April 18.

The Asus Zenfone AR's price is also a mystery, but there was an article claiming its retail price is $1,333.31. For its release date, Asus only hinted that it will be released at the 2nd quarter of the year.

The Samsung Galaxy S8's design is said to be "slick" - well, that was the term used by the Samsung's vice chairman. Whether it is true or not, that will be something each of us will have to decide once we see the final product ourselves. But for now, what we do know according to the recent leaks is that it will have no 3.5mm headphone jack, an all-screen design (90 percent screen-to-body ratio), a software-based home button, curved edges, and almost bezel-less.

On the other hand, the Asus Zenfone AR's design is in my personal opinion, surprising. As to why, it is worth mentioning that Asus was able to fit in all the needed hardware for the Tango feature and make it thinner, smaller, and more powerful than its predecessor - Tango smartphone predecessor, the Lenovo Phab 2 Pro. For its design, it is a perfect combination of metal and plastic which is, by the way, refreshing from all those metal casing smartphones nowadays. Its body dimensions are 6.25 x 3.06 x 0.35 inches and weigh 170 grams.

Samsung is rumored to launch 2 variants with super AMOLED panels for the Samsung Galaxy S8; a smaller screen size mode 5.1 inches and a larger screen size mode 5.5 inches. But there are other reports claiming that the actual sizes are 5.7 inches and 6.7 inches. It is quite confusing, but what we do know is that the larger version between the two pairs will have 4K resolution.

The Asus Zenfone AR is reported to feature a 5.7-inch super AMOLED screen with a screen resolution of 1440 x 2560 pixels and protected by a corning gorilla glass 4. For its display performance based on the reviews, it is bright and colorful.

The Samsung Galaxy S8's camera specs are expected to be great, but the MP for the rear camera is unknown. Well, for starters, the front-facing camera is rumored to be 8 MP. The rear camera could be around 12 MP to 30 MP or it could be a dual-lens camera that some sources claim it to be 12 MP + 13 MP. Anyway, regardless whatever it is, we can be sure that Samsung is really trying to take back what it lost last year by creating the potentially finest smartphone of 2017.

As for the Asus Zenfone AR, on the back, it features 3 cameras: the primary 23 MP sensor, a motion sensor, and a depth sensor for the Tango feature. On the front, it features a 8 MP camera. Regarding its camera performance, according to reviews, it is able to capture superb pictures with precision and has a RGB sensor to make sure that colors will be well-balanced.

The Samsung Galaxy S8 is reported to house a 4200 mAh battery. On the other hand, the Asus Zenfone AR will house a non-removable Li-Ion 3300 mAh battery. In terms of battery performance, I am extremely curious as to how long will the battery life of the Asus Zenfone AR last when using its AR (augmented reality) and VR (virtual reality) capabilities. But sadly, I could not find any source or maybe I just haven't look hard enough. Perhaps it will do quite well.

The Samsung Galaxy S8 is rumored to feature wireless charging, dual-stereo speakers, an iris scanner, wireless headphones and an S Pen. On the other hand, the Asus Zenfone AR is unique and practically a hybrid among today's smartphones. The Asus Zenfone AR is the second commercially available smartphone to use feature Google's Tango technology, but is the first to feature both virtual reality (compatible with Google Daydream VR) and augmented reality. It even has this advanced vapor cooling system that keeps the device from overheating when using its AR and VR features.

For me, I think that the Asus Zenfone AR is the better phone. A smartphone that features 8 GB of RAM with a Snapdragon 821, and is both virtual and augmented reality ready is quite powerful. However if Samsung will also add AR to the Galaxy S8, then the Galaxy S8 will be the better. But for now, given that the Asus Zenfone AR is the only commercially available smartphone to feature both AR and VR, it is the better 8 GB smartphone.

The Samsung Galaxy S8 is reported to be unveiled in March and will be released on April 18, 2017. It will feature one of the best stunning-futuristic smartphone designs and will also be one of the fastest smartphones of the year.

New Leak Reveals How Powerful The Snapdragon 835 Chip Is

A new leak has been discovered regarding the SnapDragon 835 chip. In the recent leak, details as to how powerful the chip are revealed and is said to offer greater display specs, improved VR and AR experience, faster charging, and more.

Why on earth would anyone need an octa-core 12GB RAM phone? Asus ROG Phone 3 rumors leaked.

An allegedly leaked audio of 'Good Luck', a song that is believed to be an unreleased song from Nicki Minaj, was recently uploaded on Youtube by a user that goes by the name CJ MARAJ. Listen here!