Tesla Model 3: Why It Is So Important 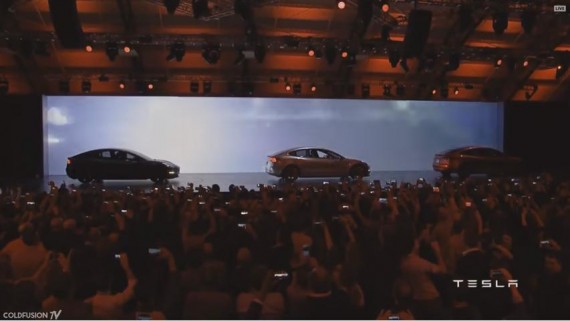 Tesla’s Model 3 is one of the most anticipated vehicles of the year. And while the prominent benefit is that it is a cheap electric car, the unit holds much more responsibility and pull than just its price tag. (Photo : ColdFusion/YouTube)

One of the most anticipated vehicles of the year is Tesla's Model 3. And while the unit is the first affordable option from the Elon Musk-run company, there are more appealing things about the electric car than its price tag. The unit's responsibility lies on both the company and the public.

The Model 3 is definitely a far cry from the earlier Model S and Model X, which were both high-end units that catered to a specific niche with specific financial capabilities. Hundreds of thousands of individuals have since registered for a vehicle and put down US$1,000 for a pre-order. The will-be mass produced vehicle will have a lot relying on it.

Tesla's future pretty much relies on the Model 3 at this point. Up until its introduction, the electric car company had only sold some 100,000 units of previous variants. But that number is expected to increase tremendously this year, especially with the opening of the Gigafactory in Texas. And with it, the risk that the company is taking.

There is an undeniable risk in creating and mass producing an electric car that retails for only US$35,000. The heart of the Model 3 will be its affordable but effective battery, which in itself requires various techniques. The company lists down large scale manufacturing, innovative supply chain sourcing as well as new chemistry in order to do this.

It is because of this that Wired has titles 2017 as the year when Tesla makes it to the top, or completely flops. This year - with the mass creation of the Model 3, the opening of the Gigafactory and the increase in overall production -- is when Musk will either see his image brought to life or not. And while Tesla does this, it also has to think about the increasing number of competition it has.

But Musk and the rest of the company seem up to the challenge. The executive's 2020 plan of half a million annual cars has been amped up for completion in 2018. And while there is doubt surrounding the success of this, there are reasons to believe its actualization as well. The Model 3, for one thing, is much simpler than its predecessors and will therefore not take as much time on the production line. The Gigafactory will also theoretically cut down the down time from third part suppliers.

The Model 3 is a sign that Tesla is ready for the bigger leagues and is confident enough in its technology to have thousands of its units on the road. Production of the same is scheduled to begin within the year, but it is unclear whether or not it will be ready for delivery before 2017 ends. It is more realistic to expect the electric car in 2018.

Tesla is putting its Gigafactory into gear, just in time to start production on its Model 3, which will be the company’s first foray into affordable electric vehicles.

Tesla Model 3 Hits Production This Week, First Car To Be Delivered This Month