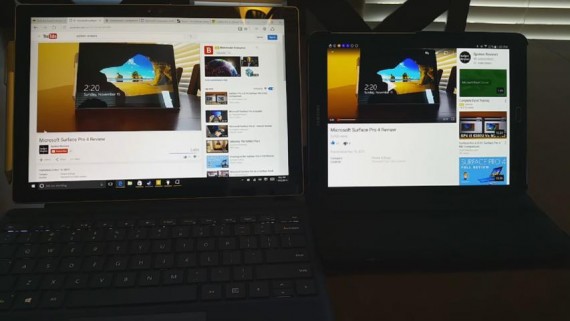 2017 is going to be great year for tablets, with two particular candidates already leading the pack. Both the Samsung Galaxy Tab S3 and the Microsoft Surface Pro 5 are expected to be released soon. (Photo : SpokenReviews/YouTube)

The tech world has already kicked off 2017 with a bang, as the Consumer Electronics Show just finished in Las Vegas. Despite the wonderful gadgets that the event introduced and showcased, there is still so much for the market to welcome as the year progresses. Two particular additions that are expected are the Samsung Galaxy Tab S3 and the Microsoft Surface Pro 5.

As IBTimes AU notes, the public has been in such anticipation over the Galaxy Tab S3 that it has been rumored that the device will be released as early as this month. But with January's biggest event already finished, this no longer looks like the case. Instead, the publication notes that the unveiling might be March, during the Mobile World Congress in Barcelona.

The publication goes on to say that there are likely to be two variants of the tablet available - an 8-inch option and a 9.7-inch variant. Both models are estimated to come powered with an Exynos chipset, as well as an AMOLED display, the latter of which Samsung has become quite an expert in. It is also a possibility that the Korean tech giant will include WiFi and LTE features in the Galaxy Tab S3.

Along with these, the Galaxy Tab S3 is expected to run on a minimum of 4GB of RAM, with individuals having the option between 32GB or 63GB of internal storage. The gadget will be powered by Android 7.0 Nougat straight out of the box. Without a doubt, the tablet will be of utmost power with all the help from modern technology.

While Samsung has been relatively silent about the Galaxy Tab S3, there have been leaks about the unit's actuality. In November last year, the device was spotted entering India for testing, which is a normal procedure for the company. More important that the sighting of the same, however, was a price listing. According to reports, the same was priced at INR34,138 which roughly translates to US$500.

But while the Galaxy Tab S3 sounds like the device that will blow its competitors away, it will have some stiff competition in the form of Microsoft's Surface Pro 5. The one clear thing that the Surface product has on its Galaxy competitor is that it can easily be transformed into a notebook. It is, after all, a hybrid device, unlike Samsung's standard tablet.

As PC Advisor notes, the Surface Pro 5 was actually expected for release in October last year, which would have been a year after the current generation. The publication goes on to say that the 2-in-1 device is now expected for release sometime in Spring. If this is true, it will put in the direct path of the Samsung Galaxy Tab S3.

It is estimated that the Surface Pro 5 will be powered by the Qualcomm Snapdragon 635 processor, which should allow for more battery life as well as the possibility of LTE connectivity. To partner this up nicely, it is estimated that it will run on 16GB of RAM as well as an option for a 2K screen or a 4K screen. Furthermore, it could ditch the USB 3.0 for a USB type C port.

Microsoft has not officially said anything about the Surface Pro 5, so everything at this point are just educated guesses. In terms of price, the upcoming unit is not estimated to cost much more than the current generation. As such, the unit is expected to cost upwards of US$1,400. The payoff, as with most Surface Pro products, is that it will have more notebook-like features.