Magic Mushrooms Can Manage Anxiety And Depression In Cancer Patients; According To Research 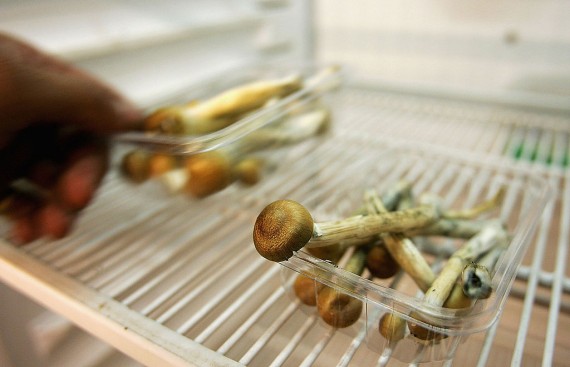 LONDON - JULY 18: A worker cleans out the last stock of mushrooms from a fridge on July 18. 2005 in London, England. The sale of fresh mushrooms has been prohibited as of today due to the reclassification of the drug to Class A. (Photo : (Photo by Daniel Berehulak/Getty Images))

For more than 40 years, magic mushrooms or psilocybin has been considered illegal in the United states. An ongoing study, however investigates on the drug's potential benefit in reducing anxiety and depression in cancer patients.

The results of the study confirmed that 80 percent of cancer patients showed significant reductions in the anxiety and depression of cancer patients within seven months after a single dose. The drug exhibited minimal side effects. Another minor trial also proved similar results.

Both trials have shown the intense proofs of the mystical experiences described by patients correlated to which their degree of anxiety and depression have significantly clinically decreased.

The Study And Its Authors

The study was conducted by New York University with 29 patients and John Hopkins University with 51 patients. The results were released in The Journal of Psychopharmacology.

The study on the therapeutic effect of psilocybin has been subjected to a meticulous review by regulators- in fact, the most arduous among a number to trials.

Dr. Jeffrey Lieberman former president of the American Psychiatric Association, and Dr. Daniel Shalev of the New York State Psychiatric Institute endorsed the work- they are among the leaders in psychiatry, addiction medicine and palliative care. Accordingly, the studies they authored are "a model for revisiting criminalized compounds of interest in a safe, ethical way." In the possibility that the other restrictions in their researched will be eased, "there is much potential for new scientific insights and clinical applications," the authors added.

Cancer patients will not have not have access to administer psilocyn therapeutically any time soon. The findings of the study, however, have paved the way for further research in multicenter trials with hundreds of other participating patients.

Mihai's anxiety was triggered upon his doctor's warning of a remission. Since then, he developed the obsessive habit of touching the nodules on his neck- same spot where the cancer was diagnosed. He travelled to Europe to celebrate the end of his treatment as well as his graduation in college. He was prompted to immediately return to New York however, as he was terrified by his doctors. With his, he resulted to drinking daily, further compromising his frail health.

These alarmed the doctors and advised him to enrol in the psilocybin study. Mihai recalls his experience, "I had an epiphany."

Further Studies On Psilocybin For U.S. And Europe

To date, psilocybin trials are underway both for the United States and Europe. These studies further consider the drug's effects on alcoholism, treatment-resistant depression and tobacco addiction. Furthermore, other hallucinogens are also under study. The Food and Drug Administration has already granted approval to a large-scale trial that aims to investigate MDMA, also known as Ecstasy, and its potential benefits in treating post-traumatic stress disorder.

Psychological distress related to cancer has affected almost 40 percent of patients. Prior studies have shown that this psychological status can even be resistant to conventional therapy.

When you cut yourself and the whole area turns red and puffy, that’s your immune system working to fight off any bacteria or viruses. In fact, inflammation is a good sign. It is part of the body’s defines mechanism that aids in healing.

The Ultimate Cure For Cancer, Finally Found? What Does Elephants Have To Do With It? Here Are The Details

As the quest to finding the right solution for the “deadly” Cancer, what are the Elephants’ essential roles in this disease? Could they actually be the game changer? What’s the truth behind claims that Elephants hold the key for Cancer? Here’s what experts reveal

She Campaigned Against The Medical Device That Caused Her Cancer; Now She Dies At 57

A woman from Pittsburgh was diagnosed with cancer following surgery using a power morcellator. She then spent her life raising awareness on the dangers of the said device— before she died from the disease at the age of 57.

Is Canada's Mental Health Care On The Rocks?

Considering the importance of a person’s state of mental condition, why did a renowned journalist slammed Canada's lack of mental health care? Are there underlying issues behind this instance? Is Canada’s mental health care on the rocks? Find out what authorities have to say

After shooting himself in the face because of deep depression, Andy Sandness gets a second chance in life after he becomes a face transplant patient sponsored by Mayo Clinic. He is ecstatic with his new look, and now feels more confident and able to get on with life.