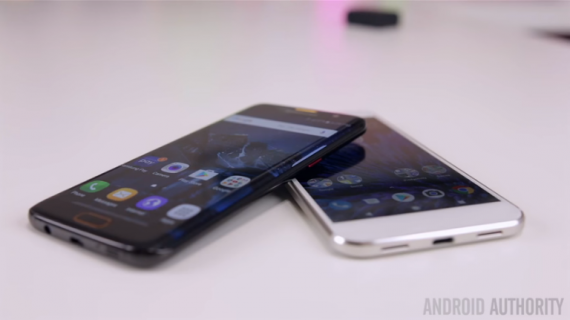 The Samsung Galaxy S7 Edge is arguable the best smartphone of 2016, but there are features that are exclusive to the Google Pixel XL that gives the older model a run for its money. (Photo : Android Authority/YouTube)

In the world of Android smartphones, there were two that reigned supreme in 2016 and are still holding up in the new year. The Samsung Galaxy S7 Edge has been hailed by some as the best handheld to be released, but there are features that only the Google Pixel XL can offer. Which is exactly why a thorough run through is necessary to choose between the two strong contenders.

To get the obvious out of the way, both the Galaxy S7 Edge and the Google Pixel XL run on Android. However, the older model runs on the older Marshmallow version of OS, as noted by Pocket Lint. The Korean tech company did add TouchWiz to the handheld, which makes it truly unique to Samsung. By adding its own touch, the company was able to incorporate more features and setting options.

On the other hand, the Pixel XL is purely Google. Running on the current Android Nougat, which is paired with both the Pixel Launcher and Google Assistant, there is a unique experience with the handheld. It is a simpler interface that is untouched by a third party, thereby producing a faster and more powerful handheld.

Depending on the region, the Galaxy S7 Edge is either powered by the Qualcomm Snapdragon 820 chip or the Exynos 8890 processor. Both, however, arrive with 4GB of RAM and a maximum storage option of 64GB, which can be expanded via a microSD card. Its battery is also exceptionally stable at 3600 mAh that is compatible with wireless charging.

Meanwhile, the Google Pixel XL features the newer Qualcomm Snapdragon 821 processor, as well as 4GB of RAM. There is no microSD slot, but individuals can purchase a model with 128GB of storage space. It also has a comparatively weaker - but still notable - 3450

The Galaxy S7 Edge has a 12-megapixel rear camera and a 5-megapixel front camera. The Pixel XL, on the other hand, has a rear and front camera that is 12 megapixels and 8 megapixels respectively. In terms of camera, both devices have been applauded for their camera systems, but Samsung does provide more flexibility while Google is more straightforward. They also share a 5.5-inch screen with 2560 x 1440 pixel resolution to fully showcase the camera's capacity.

The S7 Edge does have a unique design, however, as it has a curved edge screen. This aesthetic allows users to take advantage of the different features that it presents. This includes quick access to other applications, which can, in turn, be personalized per user. Quick access to contacts, music, news, calendar, weather and others can also be included.

But there are also features that only the Google Pixel XL can offer its consumers, as Express UK has reported. This includes compatibility with the search engine giant's Daydream VR headset, which has been publicly supported by several publications as one of the best headsets for not just mobile VR, but the virtual reality in general. Meanwhile, the South Korean company has yet to release a follow-up to its own Samsung Gear VR.

Innovation is definitely expected of the upcoming Microsoft Surface Phone. But a new patent filed by the company indicates a foldable screen feature, which - while not new - has not made mainstream yet.