Nintendo Switch Games: How Will Sports Games Fare In This New Console? 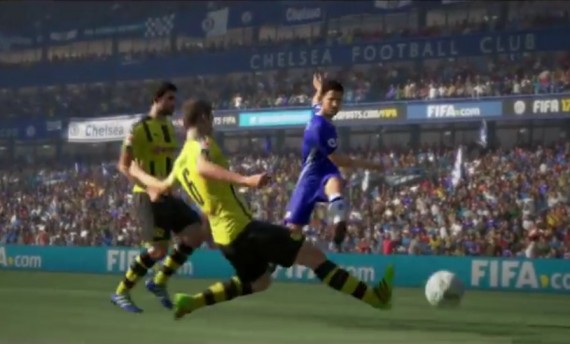 It appears that popular sports video games are churning out their versions intended for the Nintendo Switch. How will video games look like in this latest game console? (Photo : EA SPORTS FIFA/YouTube )

With the launching of the Nintendo Switch recently, many fans of sports games are wondering how it would be like to play them on this latest video game console. It caught their interest when Nintendo's announcement trailer included NBA 2K18. It appears that this is going to happen because 2K has confirmed that the game will be featured in this new system.

Popular Sports Video Games Are Switching To the Switch

2K Sports stated that there will be a Switch version of NBA 2K18 and that they will release it on September this year. Then an announcement came later from Ubisoft that it is also porting Steep, its open world winter sports video game to Switch, also in 2017. Not to be left out, Electronic Arts also announced they are bringing their FIFA franchise titles to Switch as well.

At the latest count, gamers could expect three popular sports video games coming to the Nintendo Switch this year. FIFA, NBA 2K18 and possibly Steep could be competing in the same Switch arena. Will this new game console be able to satisfy gamers who have been used to playing these games on PS4, Xbox One and PC?

Gamers know that the Nintendo Switch is not on an equal level with these standard consoles. In fact, some gamers were disappointed to realize that the FIFA version of Switch will not be developed using the remarkable Frostbite game engine. Instead it will be using the game engines of Xbox 360 and the last-gen PlayStation 3.

If this is true, the quality level that players have already been used to will considerably drop. Some even suspect that the current versions of the game will be almost unplayable in the Nintendo Switch. Others say that this new game console has very little appeal to FIFA fans who play the game on their Xbox One and PS4.

If you will consider the past experiences of gamers with FIFA 13 on Wii U as an example, the future may not look bright for sports games played in Nintendo Switch. The gameplay of FIFA 13 on Wii U was based on FIFA 12 features, such as Precision Dribbling and the Player Impact Engine which are optimized for Wii U. Since the gameplay felt outdated, not many players were into it. And because of that, EA did not make another sports game on Wii U.

In other words, this same thing could happen to the current Nintendo Switch hosting NBA 2K18, FIFA and possibly STEEP. If the game developers will use older versions of the game to accommodate the capabilities of the Switch, many gamers will not support the idea. Why would they if their gameplay will drastically degenerate?

Could The Game Developers and Switch Know Something We Don't?

This should be a concern to both Nintendo Switch and the game developers of video sports games. No player in his right mind who is already enjoying the latest technology in his video game will choose to switch to a video game that does not offer the same level of quality and gameplay. Or perhaps, Switch and the game developers have something up their sleeves that they are not revealing at the moment?

Star Wars: Battlefront Guide: Tricks That Will Help You Win In This Video Game

Winning in a complex video game like Star Wars: Battlefront will require good strategies. This article will give you some strategies that can help you win in this game.