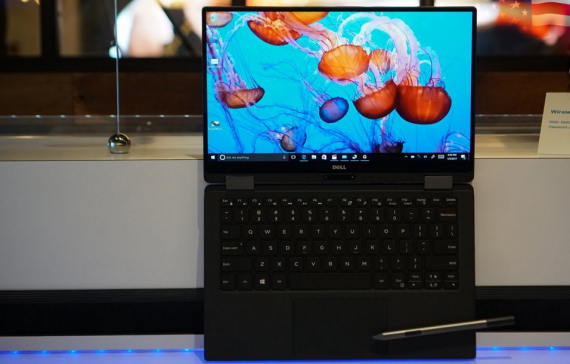 Dell's updated XPS 13 and the new Lenovo Yoga 910 are both very useful. Here's a take why the Dell product is better that the Lenovo one. (Photo : Mobilegeeks.de/YouTube Screenshot)

Dell's updated XPS 13 or the new Lenovo Yoga 910, which one is the better fit for you? Here's our quick breakdown to know why many are considering that Dell XPS 13, a 2-in-1 laptop is better.

We can all agree that the upgraded and latest Dell XPS 13 with Kaby Lake is an incremental refresh model of Dell laptops. According to PCWorld, it is very hard to differentiate the latest XPS 13 and Dell's direct predecessor. The features such as the InfinityEdge, the nigh-zero bezel that lets Dell put the guts of a 13-inch laptop into the body of an 11-incher are all present to the upgraded model. The outside of the device is still brushed aluminum and the keyboard deck consists of carbon fiber.

The real upgrade and change of the new Dell XPS 13 are inside. You will find the Intel’s latest 7th-gen Kaby Lake CPU, a basically souped-up Skylake chip that’s roughly 10 percent faster compare to others. On the GPU side, you will see a similar boost. Dell also increases the capacity of the battery by using slightly denser cells. That will take your fuel tank from about 57.5-watt hours up to 59-watt hours.

The trackpad of the Dell XPS 13 feels less rubbery compared to what is produced before. It is more similar to the Microsoft Surface Book's silky-smooth glass version. The ports don't change either. When you buy a unit, you will still get a Thunderbolt 3 using a USB-C and 2 USB 3.1 or 10GbpsType A ports. There's also a cowardly headphone jack and SD card reader too. On the other hand, the keyboard hasn’t changed either.

The Dell XPS 13 is the pick of Trusted Reviews the best Windows 10 laptop you can buy right now, so once Dell announced the unit, it was taking that winning formula to a thinner, lighter 2-in-1 design. The 1.24kg weight is a fraction lighter than the 1.29kg of the regular touchscreen XPS 13 and it measures in at just 13.7mm thick at its widest. Even better, the XPS 13 2-in-1 ditches cooling fans altogether and makes do with passive cooling instead.

The Lenovo Yoga 910 has a slightly larger display at 13.9 inches versus the 13.3 inches with the Dell XPS 13. Both devices have options for very pretty high-resolution touch screens. The Dell XPS 13 has a non-touch-screen option too and also, both laptops have speedy processors from Intel, the latest seventh-gen Core I processors.

Aside from that, both the Lenovo Yoga 910 and Dell XPS 13 are highly portable at about six-tenths of an inch thick and about 3 pounds apiece. That is a very rare feature od a 2-in-1 laptop. One main key difference of the 2 most in demand 2-in-1 laptop is its battery life. The Dell XPS 13 without a touch screen got an impressive 10 hours straight of battery life based on a test conducted by CRN. The Lenovo Yoga 910 gave a straight seven hours, though that's still pretty good for a touch-screen laptop.

An additional drawback for the Lenovo Yoga 910 is that the keyboard that has the Shift key in a weird place on the right-hand side, which can give users some typing headaches. But on the plus side, the Lenovo Yoga 910 has a 360-degree folding display for a more feature of flexibility. It's worth noting, though, that Dell just this month put out new specs of the convertible version of the XPS 13.

All in all, both the Lenovo Yoga 910 and Dell XPS 13 are 2 of the best laptops that have come out in the past few months. Either one could be a major productivity and entertainment laptop device even for different kinds of users.

The Dell XPS 13 is one of the most popular laptop series of choice of the people.

Dell's XPS 13 series have been a popular choice for laptop users. Now, a 2 in 1 models joins the team.