2017 Mazda CX-9: Your Luxury SUV Without The Expensive Price Tag 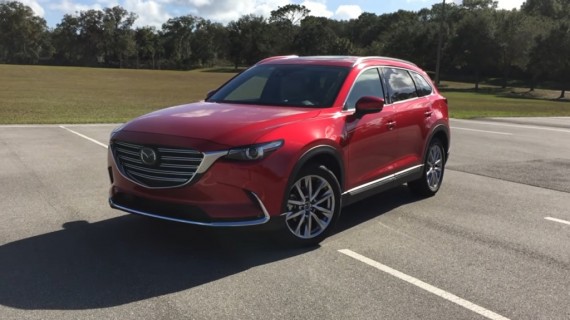 The 2017 Mazda CX-9 basically says "I can give you luxury without making you pay so much". (Photo : TopSpeed/YouTube)

We all want a luxury SUV but the fact of the matter is, not all of us can afford one. The 2017 Mazda CX-9 however, happens to offer the very thing you want but without the expensive price tag. Of course, nothing is really perfect and some things have to be sacrificed to get what you want most. Here's what you should know about the 2017 Mazda CX-9.

Here's the deal, the 2017 Mazda CX-9 is built on the same Kodo "Soul of Motion" platform as its CX-3 and CX-5 siblings. This gives the 2017 Mazda CX-9 a gorgeous look starting with its open-mouthed chrome grille along with LED grille accent lighting that makes it standout during the night. In addition, it also has expensive fog lights and LED headlights that basically give the front section a seductive look. According to Forbes, the 2017 Mazda CX-9 also has a strong shoulder that extends from the front to the rear section. Simply put, the 2017 Mazda CX-9 has an elegant look that satisfies any pair of eyes that look at it.

The interior of the 2017 Mazda CX-9 is just as attractive as the exterior. The 2017 Mazda CX-9 Signature in particular has all sorts of luxurious inputs from genuine rosewood that envelope the dashboard and other finishing touches that simply make the 2017 Mazda CX-9 scream luxury. As for the control panels, Mazda has kept things rather simple, which is probably a good move because it simply makes the luxuriousness stand out more. Reading about it may not seem very impressive but sitting in the cabin tells a different story.

The power aspect of the 2017 Mazda CX-9 would probably be something you will not be very excited with. According to report, the 2017 Mazda CX-9 is equipped with a new SKYACTIV-G 2.5-liter four-cylinder turbocharged engine that is paired with a six-speed automatic transmission with Sport and manual-shift modes. This engine is capable of putting out 250 horsepower and 310 pound-feet of torque. Compared to the other SUVs in the market, there are certainly a lot with more power but you will also have to pay a higher price for them.

The 2018 Dodge SRT Demon has been reported to be coming with a lighter body than the current Hellcat.

2017 Subaru BRZ: You Will Seriously Want To Take This One Home

The 2017 Subaru BRZ is one of those that you would simply want to bring home the moment you see it.

The 2017 Honda Ridgeline is one serious workhorse and a heck of a party truck.

Earlier, Mazda has unveiled the all-new BT-50 ute's design and select features in its Australian showrooms ahead of schedule.