News Study Found In Mushrooms: Can Reduce Or Delay Dementia And Alzheimer's Disease 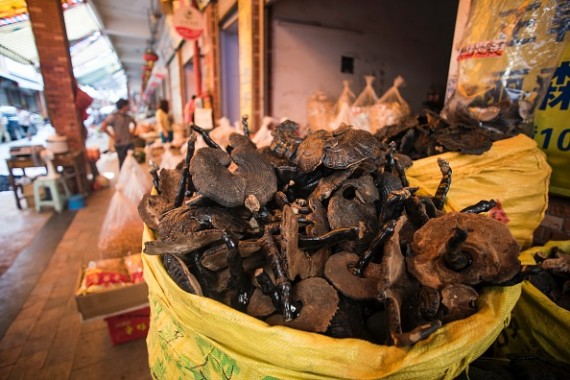 To go with China-tradition-health-award-Nobel,FOCUS by Rebecca Davis This picture taken on June 21, 2015 shows mushrooms used in Chinese traditional medicine for sale at the Caizhuanyue Market in Yulin, southern China's Guangxi region. The Nobel Prize in medicine awarded to Chinese pharmacologist Tu Youyou has put a spotlight on Chinese traditional medicine, from which she drew her inspiration, but some fear that this prize will do more harm than good for the field in her native China, where Western medicine remains nonetheless more common. <br /> (Photo : JOHANNES EISELE/AFP/Getty Images)

On January 24, new research presented that mushrooms have bioactive components that improve brain activity, preventing swelling that cause dementia. Mushrooms are efficient foods that delays aging as reported in the Journal of Medicinal Food.

In this article, "edible and medicinal mushrooms: emerging brain food for the mitigation of neurodegenerative diseases" the researchers stated the co-relation between heath and mushrooms. This article is focused on bioactive composites that is present in mushrooms that provide cognitive and neuroprotective aids. The scholars of this study were Chia Wei Phan, and Pamela David, and Vikines Wary Sabaratnam, From University of Malaya, Kuala Lumpur, Malaysia.

Researches were done long before learning how food's effect on dementia, as most investigations were conducted on foods that help cure certain cancers. With this new detection scientists are optimistic that they will be able to make new drug out from mushrooms that could treat common dementia and threatening Alzheimer diseases. It's a disease that inflicted several elderly patients around the globe, especially in the US. Chronic effects of dementia, patients even get minor strokes.

The journal publishes on regular basis and its researches contain study on bioactive compounds of functional foods, herbal, and nutraceuticals compound. The journal focuses on chemistry and biochemistry of these compounds, and their abstraction methods, analysis methods, biological roles, and use of bioactive compounds to make certain drugs that could treat different diseases. Several scientists, doctors, teachers, and scholars study this journal to get updated study.

"In an aid distinction to the body of prose on food ingredients that may help cardio metabolic diseases and also cancer, very few studies of mushrooms that have focused on food that may benefit neurodegenerative diseases," Parthasarathy said, "The existing study might stimulate the documentation of more food resources that are neuroprotective."

Augmentation of learning memory and cognitive function was also found in clinical studies which were reported recently in the Preventive Nutrition and Food Science journal. Though bitter, Reishi, one of the medicinal mushrooms can be eaten fresh or cooked. Dried out or in powdered forms of the mushroom are used to make tea in traditional and alternative Chinese medicine.

Of course, scientists are continuing the research on selected mushrooms for beneficial neurotrophic properties. But, this much me do know, certain mushrooms such Cordyceps, Lion's Mane, and Reishi have proven preventive and therapeutic benefits.

And, while there is no record of major side effects have been reported with these mushrooms, certain mushrooms may cause a negative effect with prescription medications. So, keep in mind, people with specific health circumstances should consult with a qualified, medical professional before using these mushrooms - most particularly if you're taking it along with any prescription drugs.

There has been a study linking having a high risk of alzheimer's disease to having had a number of brain concussions growing up.

A recent study shows that high blood pressure or hypertension in patients at least 80 years old may have some benefits. University of California, Irvine researchers say that patients between 80 and 89 years old who develop high blood pressure or hypertension are 42 per cent less likely to get dementia, while those who are at least 90 years old are are 63 per cent less likely to suffer from the disease.

The Cure For Parkinson’s And Alzheimer’s Disease: This Miracle Plant Might Just Be The ‘Elixir Of Life’

With continuous quest in finding the right solution for Parkinson’s and Alzheimer’s disease, could the answer be finally found in this ‘miracle plant’? What’s the truth behind claims that this plant might just be the next elixir of life as it been believed to have healing properties? Here’s what health experts have to say

Coffee lovers rejoice as science has proven an important function of caffeine to the brain. Researchers say that it may help in effectively lowering the chances of developing dementia.

Sleeping Too Much Can Be Damaging For Mental Health, New Study Suggests

Considering that the average person needs 7 to 8 hours of sleep, how can a longer duration of sleep affect ones mental health? What are the adverse effects of excessive sleeping that scientists consider as mentally damaging? Is it that serious for it to be associated with mental health? Find out what experts have to say

Excessive Sleep Is a Sign of Dementia; Here Are Other Symptoms