Tekken 7 Eliza New Gameplay Trailer Unveiled; Is It Better Than Her Free-To-Play Version? 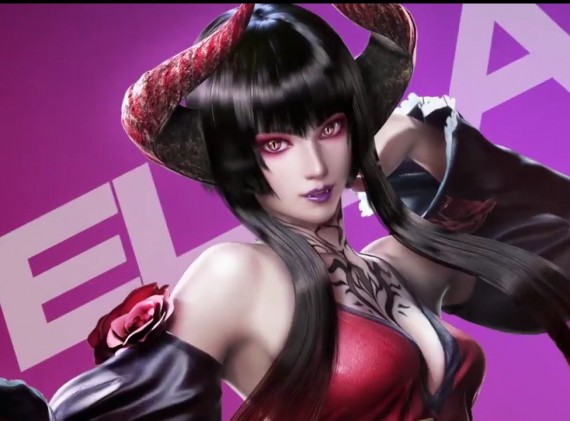 Tekken 7 is now availalble for pre-order in Japan. Apparently, it looks like the game's pre-order case reveals some information regarding the game's full list of confirmed characters. (Photo : Bandai Namco Entertainment America/YouTube)

It was revealed in the recently held EVO 2017 that Eliza, a vampiric lady fighter, is set to join the characters of Tekken 7 through an upcoming DLC patch. Lately, a teaser trailer of Tekken 7 Eliza was released showing her fighting form and combat moves in the upcoming video game. The trailer was unveiled by its game developer, Bandai Namco.

The Game Developer Is Banking On Eliza's Popularity

Actually, Tekken 7 Eliza will be the video game's pre-order bonus. But before this title, Eliza was a character in an exclusive free-to-play version of Tekken Revolution for standard game consoles. Bandai Namco must have considered her growing popularity and chose her to be the pre-order bonus for the latest version of the game.

The Trailer Gave A Glimpse Of Eliza' Fighting Prowess

The Tekken 7 Eliza trailer features the fighting form and style of the lady fighter. It portrayed her as a very strong fighter, even beating to the pulp a male opponent. However, it is still very early to say if she's really that powerful, considering that Akuma is also included in the roster of the game.

But if what the trailer showed is true, she really looks very strong. Her sleek character design and excellent combat moves are likely to induce fans to make their pre-orders for the video game. Her inclusion in Tekken 7 might prove that she is better than her free-to-play version. Fans will see if this is true when the video game is launched on June 2, 2017.

It appears that Bandai Namco is hyping the game by rewarding gamers who decide to make a pre-order of the video game to receive Tekken 7 Eliza. Apart from this, PlayStation 4 users will be given legacy costumes for three characters of Tekken 2 and Tekken 4. These characters are Kin, Xiaoyu and King.

There Are Other Bonuses For Gamers Who Make Pre-Orders

In addition, a Jukebox Mode will also be included. Fans who love to listen to the classic Tekken tracks will be delighted with this bonus. But as the TV ad says: "wait, there's more." Those who make pre-orders for Tekken 7 will also receive Tekken 6 Backward Compatibility.

Aside from these bonuses, gamers who buy the Deluxe Edition will get their season passes. These passes will give them access to three content packs. Included in these packs is a new game mode, new playable characters, a number of stages and a 35-piece Metallic Costume Pack.

Her Looks Are Not Much Different

With regards to Tekken 7 Eliza, the vampiric fighter does not really look much different from her version in Tekken Revolution. But the current advances in graphics technology make her look much better. Some visual modifications were made on her costumes though, such as her golden buttons, which were previously made of silver.

As far as her fighting moves are concerned, it seems that her long-range attack in Tekken Revolution was removed by the game developers. The teaser trailer also shows Eliza making a new evasive move that seems like she's sleeping. But it seems that she has retained her bitey throw and her short-range darkwave.

Some fans may be disappointed that the launch date of Tekken 7 was moved to June 2, 2017. They have been anticipating the release of the video game for months now. Katsuhiro Harada, project leader, said that they were really trying to get the game released earlier but they decided to stick to their original plans. The video game will be released for Xbox One, PS 4 and Windows PC.

Tekken 7 Review: Why Players Should Be Excited About This Video Game

Tekken 7 is a great video game. Here are some reason why you should consider playing it if you have not done so yet.

Game Freak is again mounting another global event for Pokemon Sun and Moon. The game developer must be hoping that trainers will be more supportive this time around.

The otherwise successful launch of "Tekken 7" was marred by online matchmaking issues. But Bandai Namco promises that it is working out its latest update to correct these issues.

Gamers compare "Tekken 7" performance on both PS4 and Xbox One to determine the best tournament standard.

Users have data mined "Tekken 7" and discovered some information about its upcoming DLC content.