Yoga No More: Boxing Took Over The Latest Fitness Craze 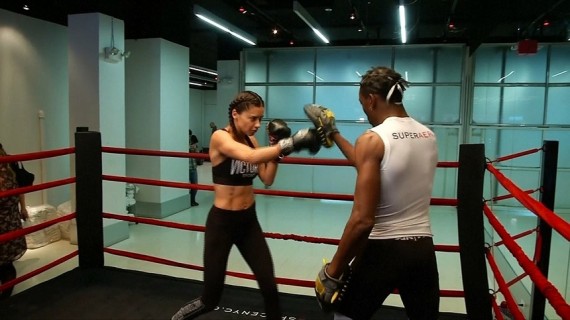 "I really love to work out and boxing definitely is my thing. I started like when I was 19-year-old. It's just a passion that I have. And regardless of show, I am at the gym as much as I can," said Lima.<br /> (Photo : News From World / Youtube)

Boxing has seen a huge popularity that boomed in the past 12 months, and now it appears that it may have even surpassed yoga as the most fitness class of choice; according to experts. Online sportswear platform Fashercise has seen a 130-percent increase in sales of boxing gloves collected last year, while the term "boxing" has become the most searched term on the site, overtaking yoga as the most wanted after activity for 2017.

It's not shocking that more and more women have been enthused to take up boxing after seeing models including Gigi Hadid, Adriana Lima and Jourdan Dunn show off the inspiring results from their own boxing exercises.

She's an eye-opener from Brazil whose stunning looks have made her into a star but it seems Adriana Lima might have missed her true calling.

Gigi also used her boxing routine to fight off prankster Vitali Sediuk, who grabbed her and lifted her up into the air when she was leaving a show at Milan Fashion Week in September. This inspired other women to take up the sport, she told Lena Dunham's Lenny Letter: "I do have that fighter in me... practicing self-defense is significant so that when you're in the moment, reacting from muscle reminiscence comes more obviously to you than freezing up."

Boxing workouts have also become progressively accessible thanks to studios such as London's KOBOX, which offers several high-power boxing classes. British model Jourdan is a regular customer at the popular fitness studios, where her brother Antoine is a personal trainer and fitness instructor.

"I know a lot of women who thinks about it, 'Oh! I could never do that, I'm not strong enough,' or, 'I don't hit things,' but I'm telling you that just after your first boxing session you will be hooked," Antoine told HELLO! "I first started boxing as a part of my own workout routine when I was working in New York at a gym called Gotham and I noticed that more women were doing boxing than men, not only for cardio but to give them the upper-body strength and definition they wanted and it is good in beating stress. Think it over, punching a bag is a great way to relieve stress and tension."

Like the rest of Victoria's Secret girls, Hunt is a fan of regular on workouts although unlike Lima, confines herself to other personal training sessions, yoga, pilates, and even ballet. One model who is happy to join Lima in the boxing ring is Lais Ribero, 25, from Brazil, who boxes in the gym five times a week, although she says taking on Lima in the ring is a no-go. 'No, I don't want to,' said the 23-year-old when asked if she'd like to take her fellow citizen on. 'Oh, my gosh, she just doesn't stop. I can't even talk about her.'

Latest news about Parkinson's states that exercise combined with medication is now officialy a part of the treament process.

What exercise does to a Parkinson's disease patient, science finally reveals.

Julia Roberts' Secrets: What Does She Do To Be World’s Most Beautiful Woman?

Julia Roberts, 49, is a mother of three. Unlike what some people might think, it is not so difficult to follow Julia’s routine.

The famous friends/models Kendall, Gigi and Bella looked like they just came out from a magazine cover after stepping out to the streets following a glamorous fashion show.

Maha Shivratri 2017: Meet The Hindu God, The Master Of Yoga

Considering the many benefits a person can get from doing yoga how has it started? Get to know who has been considered as the master of yoga. And, as the Hindu community celebrates the annual Maha Shivaratri, are there significant dates that yoga enthusiasts need to remember? Find out the details

Boyfriend Zayn Malik has proven his love is true when he came to his girlfriend’s rescue after she was accused of mocking Asians. He assured fans that his girlfriend Gigi Hadid is not racist.