Nintendo Switch Official Specs Released, Why It Will Be A Good Investment 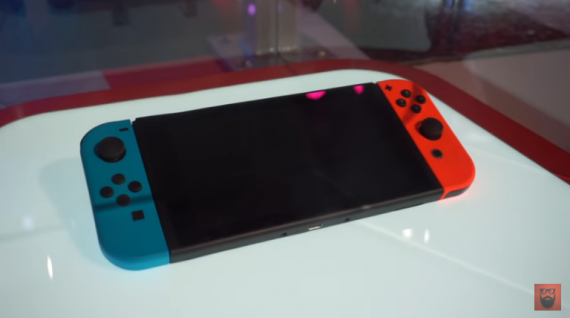 The Nintendo Switch is said not to have any support for video apps like YouTube and Netflix come launch day. (Photo : VintageBeef/YouTube)

In October 2016, Nintendo unveiled the Nintendo Switch via an exciting - albeit mysterious - trailer, which has been viewed over 25 million times on YouTube. Since then, the company has been filtering information about the upcoming console in an attempt to right previous wrongs and correctly advertise the device. The most recent details have finally confirmed the official specifications of the gaming console.

In a post by Nintendo UK, it was confirmed that the Nintendo Switch console measures 102 x 239 x 13.9 mm and weighs almost 400 grams with the JoyCon attached, but only 297 grams without the controllers. The 6.2-inch screen has a 1280 x 720 resolution and capacitive touch screen features. Straight out of the box, the console has 32GB of built-in storage memory.

Its battery life, which has been one of the more controversial aspects of the Nintendo Switch, will reportedly last more than six hours. But as the company notes, this number will change depending on the software and usage conditions. Meanwhile, it will take a full three hours to charge the device while it is in sleep mode.

What is arguably more important, however, is the CPU/GPU. However, what is vaguely listed by the publication is simply a Nvidia customized Tegra processor, which leaves a little too much to the imagination. Since the Nintendo Switch was announced, both companies have been very secretive about the custom Tegra processor.

The dock itself measures an understandably larger 104 x 173 x 54 mm and weighs approximately 327 grams. Its connectors include two USB 2.0 ports, a system connector, an AC adapter port and an HDMI port. However, the console is also expected to sport USB 3.0 connectivity in a future update.

The JoyCons will each measure 102 x 35.9 x 28.4 mm each, but the right will be slightly heavier at 52.1 grams, while the left weighs in at 49 grams. The left controller has the Directional/L/ZL/SL/SR buttons, the capture button, as well as the release and SYNC buttons. On the other hand, the right controller will have the A/B/X/Y/R/ZR/SL/SR/ buttons, as well as the HOME, release and SYNC button. The straps weigh just 18.7 grams, while the grip is 97 grams.

The specs of the Nintendo Switch are welcome details, though the console has already gained positive ground without the same. The announcement trailer, for example, confirmed that the game company was introducing a console that could be home docked, carried and played during a road trip or party, and could be played in a single or multiplayer mode as well. But beyond this, there are other reasons why the device will make a good purchase.

As iDigitalTimes notes, Nintendo has simmered down on its attempt to force motion controls on games. The upcoming device does feature motion controls, but the publication claims that it will not get in the way of regular gameplay. This was what was missing with the Wii and the Wii U, both of which did not have this feature.

Furthermore, Nintendo has confirmed that there will be plenty of third-party developer support. The actual game roster at this point does not prove this claim, but there developers like Sega, Square Enix, and Activision are all expected to release titles that are compatible with the console. Moreover, other game developers have made their praise for the device public.

The Nintendo Switch will officially launch on March 3, alongside the much awaited "The Legend Of Zelda: Breath of The Wild." The console retails for almost US$300.

The Nintendo Switch Mysteries: Unaswered Questions Before Purchasing The Console

Nintendo is definitely getting off on the right foot with the Nintendo Switch, but that does not mean the public’s curiosity has been quenched. There are still several questions that need to be answered before the upcoming console can be a considered for success.

Nintendo Switch: How It Could Be A Success

The Nintendo Switch has gotten a lot of praise for its innovation and how it corrects all the wrongs Nintendo made with the Wii U. But it might take more than that to make the upcoming console a success in the market.

Zelda: Breath of the Wild latest update is already available. This new DLC is adding more exploration, problem-solving and survival quest in the game’s open world.

Call Of Duty: WWII Will Not Be Coming To The Switch

Unfortunately, Call of Duty: WWII will not be coming to Nintendo Switch. Check out the full details here!

Nyko has created a cheap and ultra portable dock that Nintendo Switch owners will be truly grateful for.

Borderlands 3 has found a way to help people contribute to the fight of other medical problems during this time of coronavirus pandemic through playing a mini-game!