Uber & Daimler, A Match Made In Heaven: Autonomous Vehicles + A Large Network 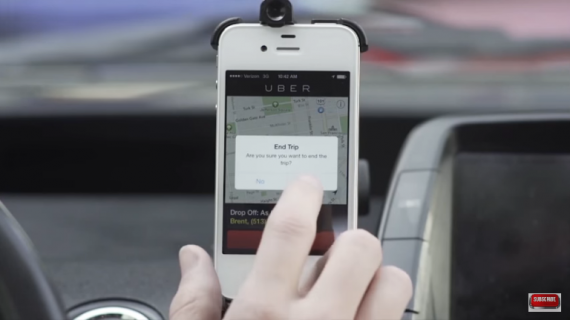 The world of autonomous driving is about to get bigger thanks to German automaker Daimler and will become more accessible as the company partners up with Uber and its large ride-hailing network. (Photo : Uber Man/YouTube)

The idea of autonomous driving is no longer a thing of the past, but it is going to take some time for the technology to be perfected and correspondingly distributed. But in a recent announcement made by Uber, it is evident that the general public will have an easier time getting access to the same. The ride-hailing company has partnered up with German automaker Daimler to provide autonomous rides to customers.

Uber CEO Travis Kalanick made the announcement of its new partnership with Daimler via an official blog post, which praised the automaker for its years and expertise in car manufacturing. He also clarified that while the partnership has begun, it will take some time before the fruits of the same are made available to the public. "In the coming years," the post said. "Daimler has planned to introduce and operate their own self-driving cars on Uber's ride-sharing network."

The delay, as The Verge notes, will largely be because Daimler is still developing its autonomous technology. The publication claims that the German company is close to releasing its first semi-autonomous vehicle, which could even rival Tesla's Autopilot system. The first model to get the new self-driving tech will be the Mercedes-Benz S-Class.

Kalanick went on to state that the partnership will only help the company reach its goal of providing reliable transportation to everyone. Autonomous driving, he reasoned, will only help reduce the possibility of traffic accidents as well as minimize road congestion. Daimler is thereby important in this as Uber has no experience in the production of cars.

By molding Daimler's auto know-how and Uber's global network, both companies hope to provide individuals with a great yet safe transportation experience. The partnership, as Kalanick claims, will only help all parties get to that goal faster. Moreover, the end picture is going to be a "future in which our cities and roads will be safer, cleaner and more accessible."

The new deal with Daimler is only the next chapter in Uber's story of making autonomous driving an everyday experience. The company first launched its autonomous driving program in September 2016. At that time, the company was limited to using Ford Focus vehicles, before Volvo SUVs were added to the roster. However, the program was forced to shut down in California as the DMV shut it down.

The newly announced partnership, as ideal as it may seem, is not an exclusive one. It is possible that Daimler will opt to provide other ride-hailing companies its autonomous vehicles. On the other hand, Uber still has the right to work with other auto manufacturers, which is a likely situation considering the company's history.

By dealing directly with these automakers benefits Uber two-fold. By participating in the industry with Daimler, the company reduces the image that Uber is reducing the sales of motor vehicles around the world. What is arguably more important, however, is that it will allow the company to connect with a steady stream of riders.

Deals between raid hailing companies and automakers have been making headlines recently, as more and more parties are investing into the autonomous driving trend. Lyft, one of Uber's largest competitors, has been working with General Motors. GM has likewise been working on producing self-driving vehicles for Lyft.

How The Tesla Model 3 Will Be Delivered On Time

Tesla’s upcoming Model 3 is scheduled to start shipments this year, but there has been some speculation about whether or not the company will be able to hit its targets. But despite the increasing demand, the company will deliver.

An Uber Driver Was Fined $250 For Not Speaking English

A Spanish-speaking Uber driver was meted a $250 fine for a violation of a Mami-Dade County memorandum which required ride-sharing service drivers to be able to communicate in the English language.

Uber's secret software, the "Greyball" has prompted the authorities to launch a federal criminal investigation on the company.