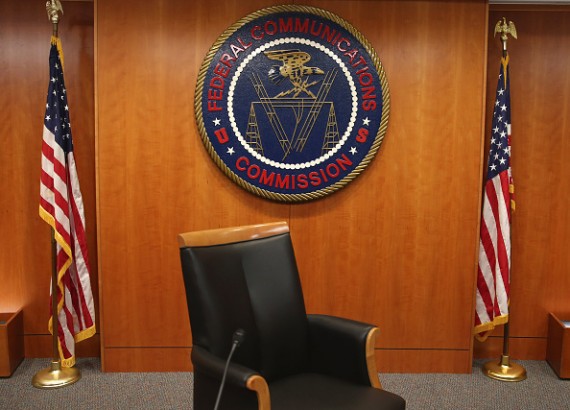 WASHINGTON, DC - FEBRUARY 26: The seal of the Federal Communications Commission hangs behind commissioner Tom Wheeler's chair inside the hearing room at the FCC headquarters February 26, 2015 in Washington, DC. The Commission will vote on Internet rules, grounded in multiple sources of the Commissions legal authority, to ensure that Americans reap the benefits of an open Internet. (Photo : Mark Wilson/Getty Images)

Previously, companies had the choice of providing certain households with a US$9.25 per month subsidy under a federal assistance program. This practice, however, will be put to a stop for at least nine companies. The Federal Communications Commission has told these companies that the option is no longer available.

The FCC decision, as noted by Ars Technica notes that some lower income households "will see their monthly bills increase by no more than US$9.25" on a monthly basis. Prior to the ruling, companies were provided the option of selling broadband-only plans in many states, as long as people were eligible and supported by the subsidy. Moving forward, this will longer be the case.

Making the subsidy available was a move made by the previous FCC chairman, Democrat Tom Wheeler. With President Donald Trump's appointment of Republican Ajit Pai as the new chairman, a handful of previous rulings have since been abolished. "These last minute actions, which did not enjoy the support of the majority of commissioners at the time they were taken," he said. "Should not blind us going forward."

The removal of the broadband subsidy is meant to minimize or totally eliminate the presence of alleged fraud in the system. But according to the publication, none of the nine affected companies are currently suspected of committing financial fraud. The companies include Boomerang Wireless, FreedomPop, Kajeet, Northland Cable, Spot On, KonaTel, AR Designs, Liberty and Wabash Independent Networks.

On the other hand, Total Call Mobile was recently required to pay a settlement of US$30 million. This was after it was established that the company had claimed reimbursements for households that were either duplicate in the system or were ineligible for the subsidy in the first place. Strangely enough, it was left out in the list of companies unable to provide the service moving forward.

As The Verge points out, however, there are about 900 service providers that are already and are still part of the Lifeline program. However, the removal of nine players so early in his role as chairman is indicative of his first moves. It is possible that Pai will continue to make changes to the program in the following months.

His concern, however, is understood by some players in the field. Last year, Pai claimed that as much as US$476 million was lost annually due to wasteful and negligent acts. And while some have counter-argued that this figure is an upwards estimate, it is slightly hard to ignore. These figures could be used for other things, supporting Pai's concerns with FCC programs.

And while this might be cause for concern for some members of the general public, there is some reprieve available. In his first few days as FCC Chairman, Pai made his plans of expanding broadband access public. He confirmed that it would be a priority of his, so it is, therefore, possible that these cuts are mere bumps on the road for a more open future. Furthermore, Pai confirmed just earlier this week that the FCC is already considering "two separate orders to spur the buildout of mobile and fixed broadband networks in rural America."

After almost a year since its announcement, the Comcast Xfinity TV app is finally ready for Roku devices. The application removes the need for a set-top box, but will have a monthly subscription fee.

SpaceX, with its experience of failed rocket launches, does not have a wrinkle-free past. But it looks like everything is about to change, as the Elon Musk-led company kicks off 2017 in the best way possible.