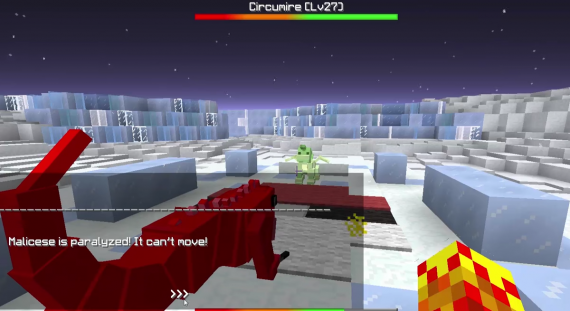 You can now enjoy a Pokemon game in the Minecraft universe without ever having to rely on mods! Meet Pokemon Cobalt and Amethyst, the first Pokemon-themed Minecraft map that's entirely mod-free! (Photo : Phoenix SC/Youtube)

For years, Minecraft players have been trying to recreate the iconic Pokémon in the block-building game. Due to the complicated mechanics of Pokémon and its various interactions, players have no way of playing a Pokémon game in the Minecraft universe without having to use mods - until today. It appears that prominent Minecraft modders have found their way around the system and fully recreated a Pokémon game in Minecraft. Here's everything we know about the Pokémon Cobalt and Amethyst.

Pokémon Cobalt and Amethyst is a map that successfully recreates the Pokémon game in the Minecraft universe without ever relying on mods. The programmers of the map achieved this milestone by making use of command blocks, which according PureCharlie, one of the developers, is similar to the mods such as Single Player Commands and WorldEdit. But this one differs in a way that they're mapmaker feature that are activated by redstone. You can see how the entire game feels like in the video down below.

As reported by pcgamer, Pokémon Cobalt and Amethyst has been in development for a staggering one and a half year and offers an astonishing Pokémon game way back in 1996. Aside from recreating the respective 1996 installment, the map adds new region, 136 new Pokémon, unique stories and even fan-made Pokémon legendary hybrids (a mix of Arceus and Giratina).

Pokémon Cobalt and Amethyst is only available in single player which means that unlike in a real Pokémon game, you won't be able to battle against other trainers nor will you able to travel and trade with them. But it's not that grim as the map offers a lot of new contents despite running on an old version of the game. According to developer Phoenix SC, the game will take around 60-80 hours in order to complete. The map also brings about an entirely new antagonist "threatening to release a legendary darkness that demands tribute," the developer said.

Furthermore, just like any other installations where you come along with a couple of gangs and antagonists (Team Rocket, Magma, Team Skull, etc.) this map also brings new gang on the mix called Team Tempest, a criminal organization from Suliqu region.

Although Pokémon Cobalt and Amethyst sounds amazingly fun, this map may be short-lived considering how Nintendo reacted on the previous projects such as Pokémon Uranium. Due to how strict the company is with regards to their trademarks and flagship titles, there's a huge possibility that this map will also be taken down in the near future. Moreover, if you listen to the audio which was used in the gameplay down below, it clearly resembles the soundtrack found in Pokémon Red and Blue.

According to PureCharlie, if the takedown is indeed to happen, they will simply go back and change the name. But it's pretty much clear that the variables and assets used to create the map can be used to takedown the map entirely.

You can experience the Pokémon-themed map by having two essential variables: a base and a Minecraft version 1.8.8. Once you have these two, you can download the map here.

Pokémon Sun and Moon Guide: How To Get And Transfer Shiny Mew via Pokébank

Here's how you can trick your Pokébank into thinking that your Mew is the legit one in order to transfer it in Pokémon Sun and Moon. Bonus: You can actually make your Mew a shiny upon transfer!

Players are starting to get weird and interesting bugs when transferring Pokemon from Gen 1 to Gen 7.