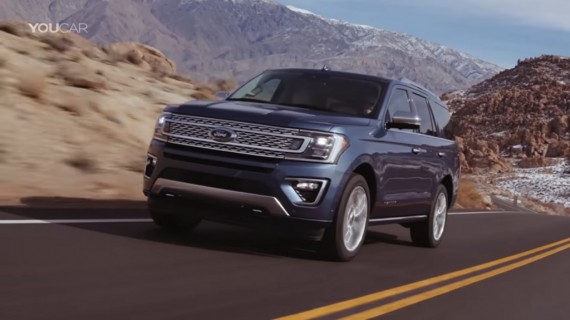 The 2018 Ford Expedition may just be the most versatile vehicle in the market today as it shows characteristics of not just an SUV but also that of a minivan and a tow truck in one package. (Photo : YOURCAR/YouTube)

The 2018 model of the Ford Expedition has finally been unveiled and it combines aspects from an SUV, minivan and a tow truck in one vehicle. To cut the long story short, the 2017 Ford Expedition is basically one vehicle that you can take for all kinds of drives, from family hauling to trailer pulling. Family trips are bound to be more enjoyable if you have a vehicle like this.

First of all, the 2018 Ford Expedition is literally the biggest version of this model yet. With that being said, the interior is also bound to be spacious and we all know what that means. You basically have an SUV that can haul not just many people but big persons as well.

According to report, the 2018 Ford Expedition provides comfortable seats not just in the second row but in the third row too. In fact, it's more than comfortable because you basically have a sofa-like seat at the back. In addition, you also have nothing to worry about in terms of access as the 2018 Ford Expedition provides easy access to the third row seats.

In order for it to be a hauler, it has to be powerful and that is exactly what the 2018 Ford Expedition is. According to Consumer Reports, the 2018 Ford Expedition is powered by a 3.5-liter EcoBoost V6 engine that is expected to deliver an output greater than that of the previous model, which is at an already impressive 365 horsepower. Ford however, has not yet released any official numbers in this regard.

2018 Ford Expedition: The Trims And Price

Alfa Romeo Giulia Quadrifoglio vs BMW vs Cadillac vs Mercedes-AMG: An Epic Showdown

The Alfa Romeo Giulia Quadrifoglio is one serious competitor as it chopped down BMW, Cadillac and Mercedes-AMG in an epic fatal four way.

The 2017 Bugatti Chiron is easily one of the most powerful hypercars ever created.

If you ever find yourself torn between the 2017 Mazda MX-5 Miata vs 2017 Subaru BRZ, remember that it all boils down to which one gives you more comfort.