Verizon And T-Mobile Tied For The Best Wireless Networks 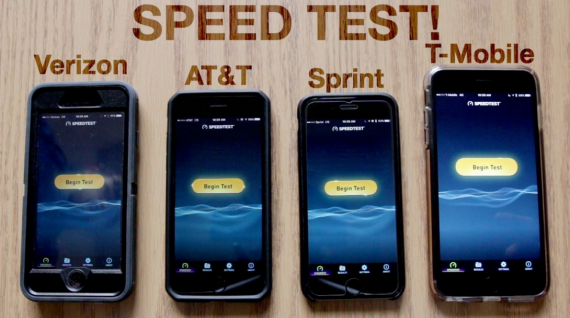 Previously, Verizon was the only number one and the undisputable mobile network carrier. Not until when OpenSignal reported that Verizon either won or shared every national prize with T-Mobile. (Photo : Stetson Doggett/YouTube)

Earlier this week, OpenSignal released its annual report on the 2017 State of Mobile Networks. This may come as a surprise to some people but Verizon Telecommunications and T-Mobile tied for the title as the best wireless networks. Based on the total of 4,599,231,167 data points from 169,683 users, it looks like T-Mobile and Verizon are standing on quite an equal footing.

Just this week, OpenSignal released its 2017 State of Mobile Networks report. This report is annually released for them to track and analyze the availability and test the speed of all the mobile carrier services in the United States. According to Capital Berg, OpenSource based its report on a crowdsourced monitoring. The results were reportedly quite clear that Verizon and T-Mobile tied as the best wireless networks.

Aside from reporting that Verizon and T-Mobile tied for the number one spot, the reports also pointed out that the 4G speeds are on the rise with many city limits being higher than the national average. OpenSource’s report is based on about 4.6 billion data points. These were gathered through its official app currently being used across the United States that has about 170,000 users.

Its analysis also pointed out the 4G supremacy battle. T-Mobile was noted to be slowly but surely gaining ground. But Verizon is still reportedly offering the best solution. The company has the highest available 4G availability. And it has also been bringing network updates. In terms of the speed of the two networks, both Verison and T-Mobile are still tied up.

Comparison To Other Wireless Network Providers

Analysts compared more reports which allowed them to point out the following. Overall, all the major wireless network providers have been bringing updates on time. Their list includes Verizon and T-Mobile as well as AT&T and Sprint. Speaking of Sprint, it also revealed some significant advances. Aside from Verizon, it also marked some of the biggest strides and trends. The consensus holds that it is doing so in order to catch up with the other 3 carriers. Overall, the United States is on an upward trend in terms of 4G availability.

Taking a closer look and analyzing more the data of the download speeds, T-Mobile and Verizon were in the top spots with overall download speeds showing somewhere 15Mbps on average. Trailed on the third spot at 12Mbps is AT&T and Sprint trailed last at 7Mbps. When looking at the 4G latency, Verizon secured the top spot here with T-Mobile and Sprint tied for second and third spots. While AT&T came in at the last place with the highest network latencies.

Learn How To Install, Activate And Use Windows 10

With Windows 10, you can configure the operating system of your computer to boot faster, mirror your screen to an external monitor, record your Xbox games and activate the platform's built-in "God Mode."

The 10 Must-Have Tech Accessories Under The Price Of $20

A very good accessory should compliment and enhance the functionality of the specific tech product. But accessories get expensive, so here are the 10 must have accessories under $20 for a techy side of you.

Android Wear 2.0 Release Date, New Features And List Of Devices Getting The Upgrade

Google has finally launched the Android Wear 2.0 to revitalise the smartwatch market. One of the best updated features is the Google’s new voice-activated smart assistant that can only be seen on Pixel smartphones.

Andy Rubin's new Essential Phone was found passing through the FCC which is an important step in the process of being able to sell a tech product in the United States.