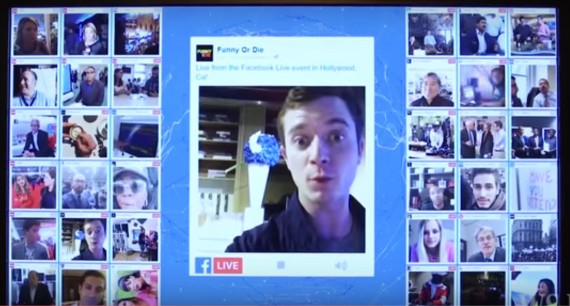 Facebook is making a couple of changes to the way that it displays and distributes videos, in its aim to encourage its users to upload and consume more videos. Facebook VP of partnerships Dan Rose said on Tuesday, Feb. 14, at CODE Media, that the company will also launch several TV apps for Samsung Smart TV, Amazon Fire TV, and Apple TV.

According to Tech Crunch, the ability to stream on the TV makes for Facebook just one more step in its larger effort to make its apps and site a more attractive platform for creators to share their videos. These efforts started with autoplay video ads in the news feed and expanded with Instagram and live videos. Facebook introduced now several changes to the way video will be displayed.

Facebook will become more like Snapchat by not cropping vertical videos anymore. The videos will follow the audio settings of their devices and will play the audio if the sound on user's device is on. Another change is that, while they scroll through their news feed, users will now be able to pull a video to the side of their feed and watch it.

Beyond these changes in the way videos are played on the platform, the biggest news is the introduction of TV streaming apps that will allow Facebook users to watch videos on their TVs. Facebook has long had the ability to stream or AirPlay videos to a Chromecast or Apple TV. But with the introduction of TV streaming apps, this ability will cover a wider range of streaming TV sets and Facebook could become a direct competitor to YouTube.

According to Business Insider, the new app will allow Facebook users watch videos from their "liked" pages and their friends on TV. The users will also be able to watch the top live videos. According to Facebook, the social media network would also recommend videos based on ones already watched.

Facebook Aims To Become An Attractive Platform For Creators

Facebook is moving toward more professionally produced content with the introduction of these new ways to watch the video. Last summer, the social media network hired CollegeHumor's Ricky Van Veen to work with creators on developing new kinds of content. This could make Facebook a more attractive platform for creators to build a community around their videos.

However, before Facebook would be able to grow as a platform for creators the company will need to find ways to pay them for their work and provide strong monetization tools. It'll also need to provide more intellectual property protection tools in order to help copyright holders fight piracy. In fact, it appears that the company is already moving in that direction.

It was reported earlier this week that Facebook is looking to license music from the big labels. This shows that the company is interested in increasing the number of videos shared on mobile apps and on its site. While that development wouldn't make Facebook a direct competitor to Apple Music or Spotify, it could help it compete against YouTube.

Given the scale of Facebook's 1.2 billion daily active user base, this move could also bring a huge new revenue stream for the music labels. It could be a new promotional stream for artists and it would make music more accessible on the platform. Video production and viewership would certainly increase as Facebook becomes a platform for desktop, mobile, and TV distribution.

Facebook's Oculus loses lawsuit to ZeniMax, being ordered to pay half billion dollars.

Why YouTube Is Top Star In The Google Family?