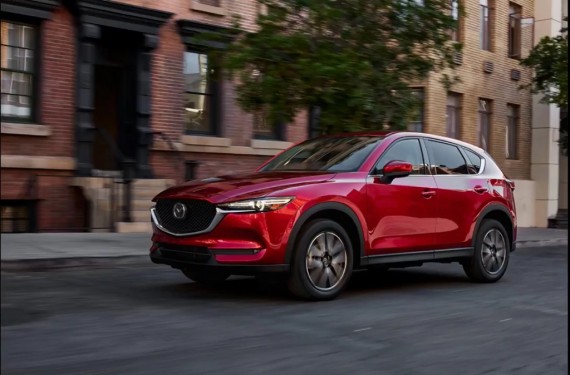 The 2017 Mazda CX-5's arrival is just around the corner and the long wait is about to pay off. (Photo : Open Eye/YouTube)

We have been patiently waiting for the arrival of the 2017 Mazda CX-5 ever since it revealed its new designs during its debut at the 2016 Los Angeles Auto Show. When Mazda announced that the 2017 CX-5 will also receive a diesel engine next fall, we became even more excited. It certainly has been a while but it looks like the long wait is coming to an end as the 2017 Mazda CX-5 will be delivered next month.

It appears that the automaker is still teasing the market as the 2017 Mazda CX-5 is still making appearances in different occasions. According to report, the 2017 Mazda CX-5 has recently made an appearance at the ongoing 2017 Canadian International Auto Show in Toronto. As the 2017 Mazda CX-5 greets the Canadian auto market, it once again displayed its updated KODO soul of motion design along with the promise that it will deliver a diesel engine before the end of this year.

The 2017 Mazda CX-5 also boasted the fact that it has better handling thanks to its updated G-Vectoring control along with its chassis that has been made 15 percent stiffer. In addition, the cabin is 10 percent more quiet than it has ever been, which makes us look forward to the 2017 Mazda CX-5 even more.

2017 Mazda CX-5: The Most Awaited Powertrains

Among the things we look forward to the most are the upcoming powertrains for the 2017 Mazda CX-5. The 2017 Mazda CX-5 will arrive with three engines along with two transmissions for us to choose from. The first engine is a 2.0-liter four-cylinder SKYACTIV-G that cranks out 155 horsepower and 150 pound-feet of torque. This will be fitted in the base trim and paired with a six-speed manual transmission. The other engine is a 2.5-liter four-cylinder SKYACTIV-G with higher output of 187 horsepower and 185 pound-feet of torque. This powertrain will be matted exclusively with a six-speed automatic transmission that has manual-shift mode along with a drive selection switch.

If you are holding out for the diesel engine however, you are going to have to wait a little bit longer. The 2.2-liter SKYACTIV-D turbodiesel is the most anticipated engine of them all and Mazda saved it for last. Reports stated that this powertrain will allow the 2017 Mazda CX-5 to have great fuel economy rating along with smoothness of drive, which can only be found in diesel-powered vehicles.

We are already halfway through the month of February and March is just around the corner. That being said, we only have a little more time to wait before the 2017 Mazda CX-5 arrives. Surely, many of you can barely contain your excitement as the 2017 Mazda CX-5's arrival draws closer and closer. One thing is certain and that would be the fact that your patience will be rewarded when the 2017 Mazda CX-5 finally hit the showrooms.

The epic rivalry between Ford and Chevrolet continues with the 2017 Mustang and 2017 Camaro.

Here's why the 2017 Acura ILX is a small luxury car worth buying.