2019 Ford Ranger Spied: Here’s What We Found Out 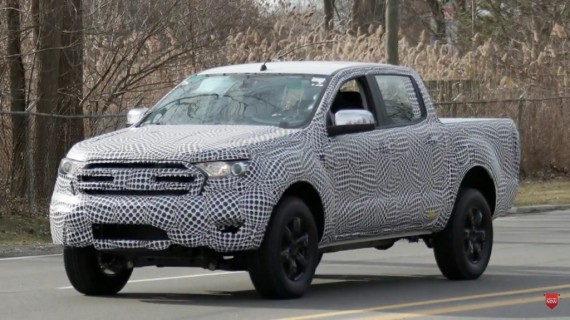 Following Ford's announcement of the Ranger's return, a prototype has been spotted doing some road tests. (Photo : One Stop Auto/YouTube)

Earlier this year, Ford announced that it will be bringing the Ranger back to U.S. market along with the iconic Bronco and many people became really excited about it. Following the announcement, the Ford Ranger has been spotted doing some road tests. Here's what we found out about the 2019 Ford Ranger.

Despite the popularity of the Ford Ranger, many people actually have no idea about what it is exactly. This is because the Ford Raptor has actually been busy dominating other markets after it has been discontinued in the U.S. in 2011.

Well, the Ford Ranger is basically the Ford Raptor's sibling. It was discontinued after being around for 30 years because, along with other reasons, Ford thought that its basically competing with the F-150 and apparently, two pickup trucks from the same automaker in the same market was not good during those times. However, things have changed and the Ford Ranger is set to make a comeback in the U.S.

Following the announcement of Ford that the Ranger will be coming back just a few weeks ago, a prototype has already been seen doing some road tests. As reported, the 2019 Ford Ranger prototype resembles the Ranger that is currently being sold in other markets. Accordingly, the 2019 Ford Ranger prototype also shows a conventional crew cab paired with an independent front suspension along with solid axle in the rear section.

According to Car and Driver, despite the prototype's use of the Ford Ranger's global body, it would appear that the U.S. spec will arrive with American inspired designs. It was mentioned that the prototype has a twin-bar grille reminiscent to the one found in the upcoming 2018 Ford F-150 that made its debut during the 2017 Detroit Auto Show. In addition, the upcoming 2019 Ford Ranger also sports the same taillights of the 2019 Raptor, which basically says that the test mule is not far from the actual production version.

Now here is where things become more interesting. Reports state that the 2019 Ford Ranger is expected to be fitted with a 2.3-liter inline-four as its base engine. In addition it will also be equipped with a 2.7-liter or 3.5-liter EcoBoost V6 for the premium and sport trims. A 3.7-liter naturally aspirated V6 will also be available for the lower trims and a diesel may also be on the way in the form of a 3.0-liter Power Stroke diesel that will also be fitted in the upcoming 2018 Ford F-150 Raptor.

At this point, we don't know yet whether the 2019 Ford Ranger will be making use of the automaker's new 10-speed automatic transmission but there is a good chance that it will. Of course, we don't have the numbers for these engines yet but we will surely bring you updates as soon as we get them.

Here's why the 2017 Acura ILX is a small luxury car worth buying.

2017 Buick Envision Review: It’s More Capable Than How It Appears

The 2017 Buick Envision is actually more capable than how most people would give it credit for.

The epic rivalry between Ford and Chevrolet continues with the 2017 Mustang and 2017 Camaro.