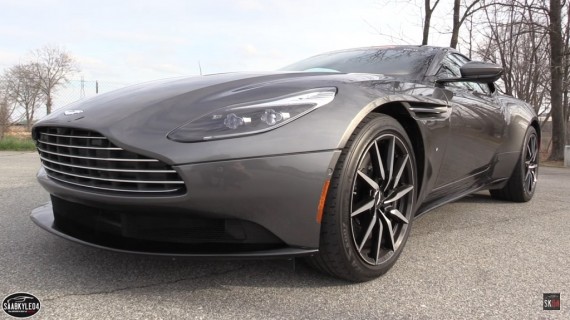 The Aston Martin DB series are among those vehicles that have been immortalized thanks to James Bond. Whenever someone talks about Aston Martin, the secret agent with a license to kill automatically comes to mind. That being said, what is it exactly that makes the Aston Martin DB11 or James Bond's car special?

One of the characteristics that makes the 2017 Aston Martin DB11 a really popular car is the fact that it is a powerful one. Theoretically, if James Bond would drive a car that does not have a lot of power, then the bad guys would surely catch up to him wouldn't they? According to report, the 2017 Aston Martin DB11 is powered by a 5.2-liter twin-turbocharged V12 engine. Accordingly, this powertrain is capable of cranking out 600 horsepower and 516 pound-feet of torque.

If you have been a fan of the Aston Martin DB series, you would notice that the 2017 DB11 strays from the norm of the previous models that were usually equipped with a 5.9-liter naturally aspirated V12 engines. Apparently, the new powertrain for the 2017 Aston Martin DB11 is paired with an eight-speed automatic transmission that allows the car to accelerate from zero to 62 miles per hour in just 3.9 seconds with a top speed of 200 miles per hour.

If you find reading about the 2017 Aston Martin DB11 to be exciting, you will find that driving it offers an even higher level of excitement. According to Motor Trend, the quality of the ride will be among the first thing that will catch your attention. The 2017 Aston Martin DB11 has great handling that allows you to handle those corners with complete confidence.

2017 Aston Martin DB11: A Price That Is Not Meant For Everybody

Alfa Romeo Says Giulia Wagon Is Not Coming Because Of Stelvio

Alfa Romeo confirms that Giulia Wagon is no longer coming to make way for the Stelvio SUV.

The U.S. auto market is in for a treat as BMW creates Limited Lightweight M2 M Performance exclusively for North America.

What happens when the 2017 F-150 Raptor takes on the 2017 Chevrolet Silverado? The answer is nothing short of "demolition".

Aston Martin DB11: The Latest Supercar Is An Absolute Monster