2018 Toyota Camry: Simply Better Than Any Of Its Previous Versions 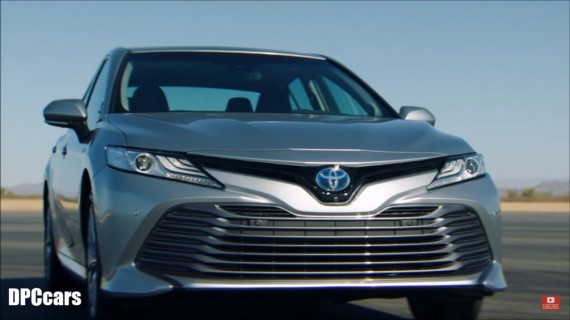 The 2018 Toyota Camry promises to be even better than any of the previous versions. (Photo : DPCcars/YouTube)

The sedan market has been slowly shrinking thanks to the surge in the SUV segment. However, the contenders in this segment are not about to give up the fight just yet. The Toyota Camry is considered to be one of the best cars in North America and its 2018 model is out to prove itself once more. Given how Toyota has made great improvements in the 2018 Camry, you will find that this version is simply better than any of its previous models.

The 2018 Toyota Camry offers a couple of reliable powertrains for your daily drives. The 2018 Toyota Camry will come equipped with a standard 2.5-liter four-cylinder, although its capabilities have not yet been revealed. If you have quite the need for speed, you can simply move up to the more powerful configuration. Apparently, a 3.5-liter V6 engine is also available but like the base engine, the numbers have also not been mentioned yet. Nevertheless, the previous engines were good for 178 and 268 horsepower respectively and this means that the next ones will most likely be close to these numbers.

Power alone does not make a car good enough. It has to combine elements such as good fuel efficiency and good driving experience as well as good riding experience for the passengers. The 2018 Toyota Camry offers those and offers it in style. As far as the fuel economy goes, the 2017 Toyota Camry had a range of 24 and 33 miles per gallon in the city and on the highway respectively. That being said, the 2018 Toyota Camry is expected to bring even better numbers especially in the hybrid configuration.

In terms of driving dynamics, it appears that Toyota has given the 2018 Camry a double wishbone suspension and the automaker claims that this will give the car a better responsiveness when it comes to its handling. In addition, Toyota has also added some noise and vibration cancellation by adding a four-point engine mounting system. This means that you and your passengers can expect a nice ride from the 2018 Toyota Camry.

The 2018 Buick Enclave is scheduled to make a 2017 New York Auto Show debut with a major change in appearance.

1996 BMW Where Tupac Was Shot Now For Sale

The last car Tupac Shakur was in before he died is now for sale for $1.5 million.

The previoous ZL1 was a beast then but the 2018 Chevrolet Camaro ZL1 1LE is a monster now.

The 2018 Camry offers two conventional gasoline engines, both of them substantially more powerful and fuel-efficient than last year. And Toyota has managed this without resorting to downsized turbocharged engines.

Toyota has just claimed its Land Speed Cruiser to be the fastest SUV after modifying it from its off-road built to a powerful speedster.

General Motors has officially left their operations in Venezuela as April reveals a decline in sales.