Technology can be admittedly a bit hard to use for some people as times have changed and in a hilarious turn of events, a boss was video calling her workers when the potato filter turned on and she had no idea how to turn it off! The whole meeting continued despite the potato Microsoft filter! 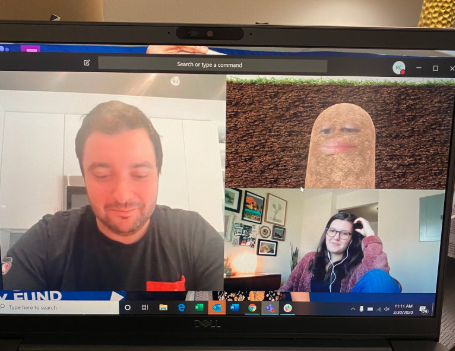 The employee with the story

The story was reported on a Twitter thread including the hilarious story as the user @PrettyClegg shared a funny screenshot from a recent Microsoft Teams meeting between the boss and several of her coworkers. Apparently, the two employees in the photo appeared normal but the boss's screen seemed to be having some trouble.

In a tweet by @PrettyClegg, she explained how her boss suddenly turned herself into a Potato on Microsoft Teams and had no idea how to turn the feature off so she just decided to leave it as is during the entire meeting!

my boss turned herself into a potato on our Microsoft teams meeting and can't figure out how to turn the setting off, so she was just stuck like this the entire meeting pic.twitter.com/uHLgJUOsXk — Rach (@PettyClegg) March 30, 2020

The boss's name was Lizet Ocampo and her face was not seen at all! Only two eyes, a pair of red lips, and a whole potato body where what were seen of their boss. The faces of the two employees were still pretty normal and the only thing that changed was the potato filter on their bosses screen.

The image of the potato Microsoft mishap

The specific image of the whole happening immediately became viral garnering more than 600,000 likes in a span of only 24 hours! The reactions to the tweets were quite enthusiastic which meant that @PattyClegg had to include her coworkers!

Lizet Ocampo was then identified as potato boss in the hashtag #potatoboss circulating twitter! It was mentioned in a tweet how the employees were able to hold it together despite the hilarious sight of their boss, potato boss rather had been rocking the filter throughout the meeting!

The boss took it quite well

Even Ocampo was able to take the "potato boss" pun herself in the name of good fun during this time of quite a few heavy adjustments! According to a tweet by Ocampo, "I yam potato boss. You should see me in a crown, right @billieeilish? I yam glad this is making folks laugh at this time. Please stay planted at home and safe!"

A return of puns have been exchanged between @PrettyCleg and her boss tweeting that she even avoided being "sacked" and that the boss and @PrettyCleg were able to "hash things out". It was also added that "our team is still laughing with you all.

The entire exchange struck a chord with thousands of Twitter users, many of whom claimed that it was the "best thing" they'd ever seen.

Other Twitter users have been voicing out their thoughts on this matter with one user saying in a Tweet that "I want to congratulate her colleagues that could keep running this meeting under this situation. It would be impossible for me,"

Other users were asking how they would be able to replace the #potatoboss incident themselves!

Read Also: How to Keep Your Remote Team Engaged