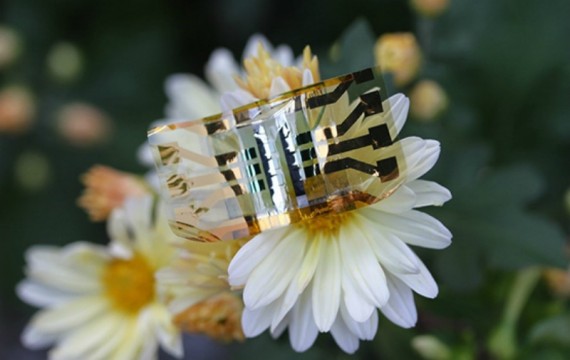 A flexible solar cell was created by an international team they say could power the future generation of wearable technology. The device would be less than a tenth the width of a human hair and can also be bent. Researchers expect the invention have a lifespan of about 11.5 years and operate for more than 20,000 hours with little to no quality deterioration.

The research paper was posted on the Joule and PNAS journals.

The research team involved Monash University and had developed the high efficiency super-thin solar cell and comes with advanced mechanical bending and stretching capabilities while also featuring the extensive capacity to act as a long-lasting power source.

What were the team's research findings

These machinations can reach a power conversion efficiency of about 13% while having 97% and 89% efficiency retention after 1,000 bending and stretching cycles, respectively.

Research Fellow in the Department of Materials Science and Engineering from Monash University Dr Wenchao Huang explained the 13% efficiency they were able to derive from the device was monumental as its one of the highest efficiencies in organic solar cells.

The PNAS paper, on the other hand, showed upon exposure to a unique method, the device's performance decreased by only 4.8% after operating for a whipping 4,736 hours. It also showed the cells could run for more than 20,000 hours or 2.5 years continuously, with little to no quality deterioration.

Read Also: The New DJI Mavic Air 2 LEAKED! Here are Photos of What It Looks Like And Everything You Should Know Including Release Date And Features

At 2 square centimetres, the device is light enough to be placed on a flower petal and has a power generation of 9.9W per gram.

With continuous experiments, this innovation could someday replace batteries and several technologies, including, but not limited to; mobile phones, watches, and other wearable or miniature tech.

Who are the minds behind the innovation?

Japanese researchers at RIKEN, along with the help of teams from several universities along with Monash University, were the leaders of the study. The next step would be to bring the device to the commercial market, which the authors are now working on.

Dr Huang stated they had developed one of the thinnest solar cells in the world while being ultra-flexible. The technology can also simultaneously achieve better power conversion efficiency, exceptional mechanical properties, and profound stability. Huang is very optimistic about the potential of the invention in replacing power sources of the future.

The devices were created in a laboratory in Japan with state-of-the-art equipment and scientific processes. Other sensitive methods, though, were conducted in a separate facility that specializes in renewable energy experiments.

These low-cost solar cells can be produced with ease utilizing continuous printing technology, which is ideal for mass production and meeting demand.

The new smartwatch frim Huami is now available on Indiegogo and you wouldn't guess how amazing it looks and fits!

The scientists that took a photograph of 1998 OR2. are currently executing social distancing guidelines as well as wearing face masks at all times while in the facility, which brought about the hilarious surprise. Zoom out to see it yourself!

Tom Hanks and Rita Wilson Donates Blood for the Development of 'Hank-ccine', a Coronavirus Vaccine

After their initial statement sharing their experience with the deadly virus, the two actors kept fans updated with their condition regularly in their isolation Down Under. They eventually made a full recovery and made their back home to Los Angeles.