[Instagram Live] Why Did the Recently Recovered Teddy Riley Versus Kenny "Babyface" Edmonds Remach Go From Fierce to Friendly? Battle of the Producers 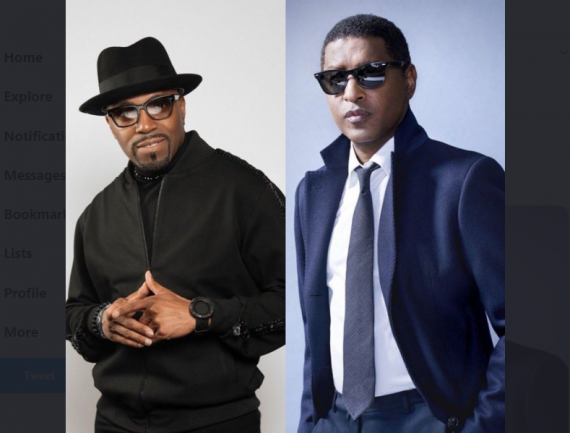 After the first attempt of both R&B producers at their much-hyped battle was abruptly derailed due to certain audio issues that happened over the weekend, Edmonds along with Riley did not miss a beat during their recent rematch on Monday!

Instead of being a heated battle between these two producers, the competition ended up with the producers giving compliments with one another with Edmonds even telling Riley that "I'm honored to be in here with you, man."

Riley then continued by saying that Edmonds inspired him and the wholesome battle turned into what seemed to be a collaboration instead. The two producers were then harmoniously jamming with one another by appreciating each other's music.

How the battle went down

Things were already going really sweet for both of them until Edmond finally brought out a guitar and started to play a live acoustic version of "When Can I See You Again" tipping the scales to his favor. Everyone started commenting on the guitar that Edmond brought out.

Toni Braxton, whose hits include songs like "You're Making Me High" along with "Another Sad Long Song" (which were both produced by Edmonds himself) even tweeted out how much he loved the fact that Kenny actually brought out the guitar.

Read Also: Is Lil Uzi Vert and Playboi Carti's Beef Real? Or Is This a Gimmick for a 2020 Collaboration?

Everyone then continued to agree that the viewers were the ultimate winners right after the two of these music producers were able to bring hundreds of music fans together through music even while social distancing amidst the ongoing worldwide pandemic.

Braxton then congratulated both of them complimenting them and saying that their competition was able to elevate his mood.

Even Bruno Mars tweeted out that both of them clearly won and that everyone was a winner by being able to go back and forth with an amount of pure greatness.

The previous battle did not end as expected due to certain sound and technical difficulties that made pushed Riley and Edmonds' battle to be postponed. Riley seems to have been able to prepare for some sort of concert, with a whole set-up that even led to echoing and playbacks. After spending about an hour of troubleshooting, the two of them then agreed to postpone the battle to another time.

The battle that happened on Monday was not exempted from technical difficulties either. In fact, at some moment, Riley's screen even started to freeze several times before his internet connection was lost. Riley and Edmonds were able to finish the battle separately on their respective Instagram feeds.

It was then revealed that Edmonds and his family were actually diagnosed with COVID-19 and are currently recovering. He then reported that they have finally tested negative and are on their way to a better health according to a statement he gave during his 62nd birthday on April 10.

The information was contributed by The Associated Press.

Instagram recently launched some new fonts for Stories. One of which is a Comic Sans-line font that draws mixed reactions from users.

Here's How Cardi B Looks Without Makeup