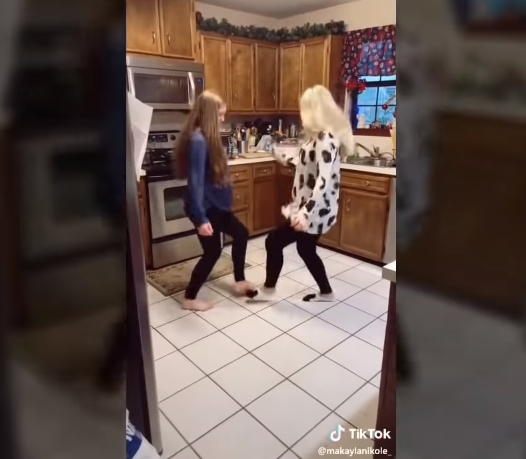 Just recently, a mother-of-two has broken not just one, but two of her ankles while trying to do the Oh Na Na Na TikTok dance challenge that's now popular around the internet. The 27 year old Sapphire Charlesworth from Chester-le-Street located in County Durham, has previously tried to tap her feet against those of her girlfriend Naadjele Lartey when she suddenly fell to the floor and heard a cracking sound!

Naadjele said that she thought that her partner was just exaggerating the pain that she was feeling and that they were just trying to see if the pain would eventually wear off but then they had to call the ambulance.

Right now, Sapphire's broken left ankle is in a cast while her other foot has been placed in a moon boot right after the doctors found out that she had actually torn some of her ligaments! She might even need an operation in order to fix her ankles in hopes of walking properly again.

The Oh Na Na Na challenge involves making their contestants tap their feet together recorded in a social media video to the sound of the previous 2017 song of the same name made by BondeR300. IT was quite popularized by different celebrities which include Chelsea midfielder Ruben Loftus-Cheek.

Ms. Charlesworth said that they were just practicing at home when she then slipped and heard a sort of cracking sound, "and then I was in a heap on the floor." She was then treated at the University Hospital of North Durham where these breaks were later on identified and a cast was then applied.

The mother's warning to others

The mother now recommends anyone who wants to try out this challenge to "approach with caution" and said that the challenge is not as easy as it looks on social media. Ms. Charlesworth then thanked the NHS staff that were caring for her by saying that because of them, she was able to get through the situation and that through all that has been happening, they are still keeping their spirits high.

She is currently back home and being nursed by her partner, who is also caring for her two younger children. The broken ankles have been hard on all of them and not just Ms. Charlesworth alone.

Aside from the Oh Na Na Na challenge, there are still quite a lot of viral videos on TikTok of people doing all sorts of dances. TikTok has become extremely popular especially now that people are urged to stay indoors and avoid going out unless absolutely necessary.

TikTok may be one of the many ways which are currently helping citizens deal with this sort of pandemic that is crippling not just the economy but also their habits, routines, and entertainment. Since people cannot go outside and socialize, people are trying to connect with each other through virtual means and TikTok is one of them.