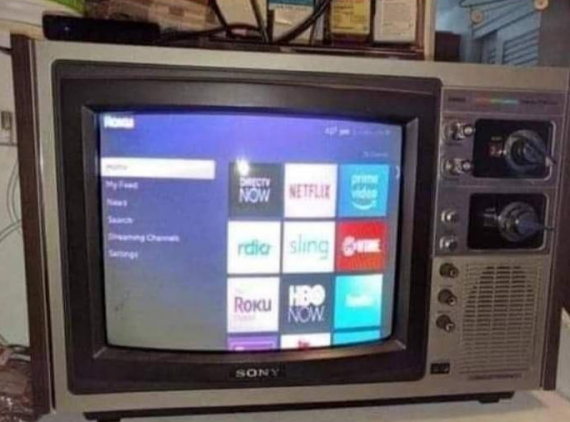 A post has been circulating on Reddit including an image of what seems to be like an old school box-type TV with the Neftlix platform on it and a caption saying "I'm still trying to figure out how the h*ll my grandma pulled this off" posted by a certain Reddit user known as tanishvv.

The comments were a mixture of both amazement and disbelief with one user stating that this was actually just a Photo that was shown on the screen in order to trick people to think that the grandma was able to access Netflix on this old school box-type television that looks like something sticking around before the 2000s.

Aside from all these comments, there was one particular comment that stuck out of a possible method that could make this possible. Although it was admittedly just a theory, the collection of explanations make pretty convincing arguments.

Not stolen from ifunny from r/memes

What does the theory suggest?

Other supporting statements say that in order to accomplish this, the RF had to be attached to an RCA converter.

There was even a mention of the "HDMI To RCA Mini Composite 1080P Audio Video AV CVBS Adapter Converter For TV" product in order to make this possible and although this is still just a theory, everything is still pretty interesting.

The discussion as to whether or not it is possible to achieve what the image suggested is still ongoing and although it has not reached a conclusion, there have been really interesting theories that point towards its actual possibility.

The age of Netflix

Netflix is still currently leading the world of streaming and it seems that its name and service has become a norm to most households. The convenience of Netflix allows its users to watch on their phones, computers, and also their smart TVs.

Online streaming has started to hurt the TV industry after severely damaging the DVD industry. Back in the day, Netflix actually offered to sell their own platform to Blu-Ray, which was the leading brand that time when it came to movies and series and entertainment in general, but Blu-Ray passed on the offer.

Nowadays, Blu-Ray is rarely heard of and Netflix has gained way too much popularity that there has even been an ongoing phrase in pop culture called the "Netflix and chill" which pretty much shows just how popular this brand has become.

Box-type TVs used to be a thing of the past and now the static gritty resolution you get just gives off that nostalgic retro vibe instead of actually being of good use. Nowadays, there are very few people that actually still use this type of technology.

Finally, there's a way to get legitimate IMDB reviews on Netflix! Here's how to do it!

Want to watch a show or movie but you can't pay for those subscription-based services? Here are some free alternatives to Netflix that you can enjoy right now!