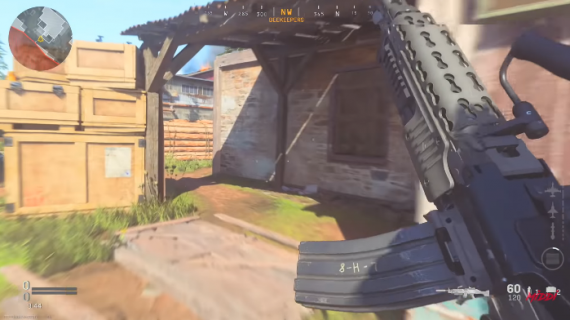 As Call of Duty: Modern Warfare's season 3 is coming close, another new batch of content is said to break in as well containing one of the most awaited MK9 Bruen Light Machine Gun by Infinity Ward, which was previously added during the massive April 28 update.

Just like other LMGs, this new edition contains the basic principle strengths such as "high accuracy" along with "reliable damage." There are also a selection of attachments to choose from but one particularly interesting blueprint is "the glitch," the banging machine gun that even has room for versatility.

Although most of the LGUs really are lumbering beasts, Bruen actually contains the flexibility to become a juggernaut of the assault rifle division. This position is cemented by its ability to run its 60-round mags as your own ammunition attachment, which are also shown in the Glitch blueprint and that's what makes the gun very mobile even in-combat.

Here's how to unlock the MK9 Bruen Light Machine Gun

Apparently, you still get to choose two different ways to unlock this gun and that's either by completing a certain in-game challenge or just by simply buying it from the Call of Duty: Modern Warfare store.

For those others who are keen on jumping into it, all you have to do is buy the Encryption bundle, which in turn gives you access to the Glitch blueprints of the MK9 Bruen Light Machine Gun for you to play around within the multiplayer game and Warzone.

For those who are a little more budget-oriented or keen for a new challenge, all you have to do is finish the MK9 Bruen Light Machine Gun's in-game challenge of getting three kills when an enemy is close to smoke with the use of an LMG across 15 different battles.

This is an interesting challenge, especially when it comes to the VLK Rogue Shotgun. But players should have no problem equipping a smoke grenade, thermal scope LMG loadout, and also jump into multiplayer until they have accomplished their goal

Read Also: DICE Releases "Last" Update for Electronic Arts' Star Wars Battlefront II on April 29! What Does the Future of This Game Look Like?

The Laser functions at 1mW, 5mW, and a Tac Laser.

The Stock uses both FORGE TAC Stalker and Ultralight as well as FSS Close Quarters Stock, Skeleton Stock, and the option for No Stock at all.

Ammunition goes on a 200 Round Belt with 60 Round Mags.

The Underbarrel uses a Bipod and a Commando, Merc, Operator, Tactical, and Ranger Foregrip.

Call Of Duty: Modern Warfare Remastered To Be A Stand-Alone Version Soon

Call of Duty: Modern Warfare Remastared will be available as a stand-alone video game soon. Some photographs were released recently indicating that this is a distinct possibility.

An Overview of the Training Needs Assessment