Justin Bieber and Ariana Grande's Upcoming Music Video Almost Included Carole Baskin! Apparently, One of Them was Not Happy with the Idea 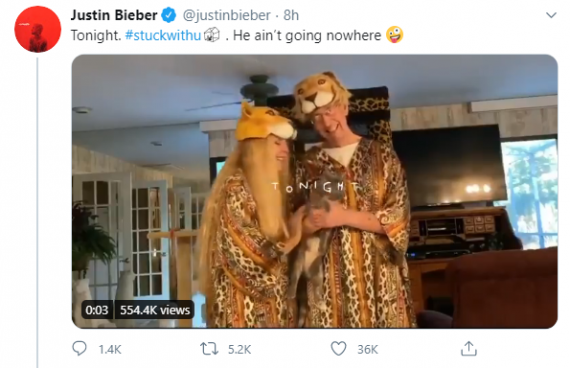 Oh, Carole Baskin, what have you done again? Just recently, the controversial arch-enemy of Joe Exotic from Netflix's popular Tiger King sent a clip as part of an "audition" to appear on the duo's next music video.

The duo previously announced that they will be accepting homemade clips showing how people deal with social distancing with the ones they love and surprisingly, the founder of Big Cat Rescue was among those clips that popped out.

It seems like Justin Bieber was entertained uploading the clip to his Twitter account with pun related the title of their new song "Stuck with U."

In the Tweet, the Canadian pop star put the caption "Tonight. #stuckwithu . He ain't going nowhere" in reference to the controversial topic revolving Baskin.

Apparently, Ariana Grande was not happy with this and responded "for the record, I did not allow or approve this clip to be in the actual video. but. nonetheless. it exists and that's ..... unique. anyway, 7.5 hours !"

7.5 hours was a reference to how long it would take before the music video would be uploaded at the time of the tweet.

The music video is supposedly also a fundraising activity for the First Responder Children's Foundation that provides fund grants and scholarships for the children of the brave healthcare workers, paramedics, EMTs, police officers, and also the firefighters that are sacrificing a lot during this pandemic.

Baskin is the subject of a huge controversial debate going on as to whether or not she killed her previous husband.

The Netflix series called Tiger King exposes a few inconsistencies regarding the disappearance of her husband which Joe Exotic blatantly expresses.

The first fishy detail of her previous husband's disappearance is the denied restraining order where Don Lewis, the former husband, claimed that he was in fear for his life.

Shortly after the denial of the restraining order against her, he vanished into thin air and was never heard of again.

A lot of people have questioned his disappearance but were allegedly afraid to act because of the Carole Baskin herself.

The whole series on Netflix follows a string of unimaginable events running through a peculiar plot. Except, this series claimed to be a reality show and that the shots caught on camera were true!

The bizarre world of Joe Exotic, the gay gun-slinging cowboy zoo owner has been a hot topic surrounding social media these days.

Although it seemed like Justin Bieber was very supportive of the idea that the Big Cat Rescue owner should appear on their music video, Ariana Grande was very vocal about her disapproval.

The post on Twitter shows a clip that could have been included in the music video if Ariana Grande agreed to its inclusion.

Ariana Grande has not yet given an official statement regarding her disapproval of this choice.

Finally, there's a way to get legitimate IMDB reviews on Netflix! Here's how to do it!

Want to watch a show or movie but you can't pay for those subscription-based services? Here are some free alternatives to Netflix that you can enjoy right now!