Final Fantasy XV offers a substantial amount of content, and if the main story isn't enough for you, there's an expansive post-game content that you can sink your' hands into. This part of the game, though, is much more unforgiving and requires you to carefully study your opponents and be equipped with sufficient armours and weaponry.

The game by Square Enix offers a wide variety of weapons types, and they all have potent attributes, and some even have unique effects. If you wish to deliver the most brutal barrage of attacks, then the best weapons are must-haves.

Listed below are the best weapons that can be found in FFXV, along with exactly where and how you can get your hands on them. 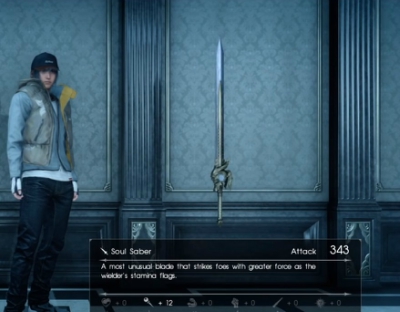 This blade increases its damage based on Noctis' Stamina, gaining high power output the lower it is, which can be strategically used after hanging from a ledge of running for a while. It also boasts impressive stats to deliver devastating damage.

To even get this weapon, you have to finish the game once to enter the post-game section and get the help of Randolph, the one that gives you sidequests, to locate it.

Randolph will give you a series of five challenging quests, where you are tasked to defeat powerful monsters, each rewarding you with a late-game weapon, and Soul Saber being the fourth quest reward.

The boss for this one requires high-levels, and as a forewarning, will require you to kill a Phalaris, which is susceptible to greatswords. 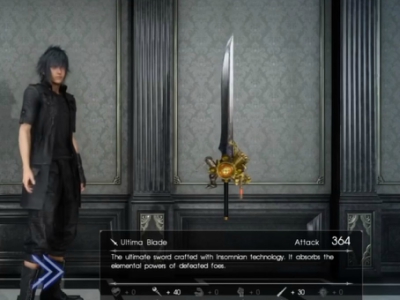 The Ultima Blade, as its name suggests, is the ultimate blade for Noctis that's an upgrade to the weapon that he is wielding at the beginning of the game. It has a unique effect of absorbing elemental energy every time you kill an enemy with it, which you can use to craft powerful magical spells.

This weapon can be acquired as early as chapter 3 by finishing Cid's sidequest series 'A Better Engine Blade,' where the third quest ultimately gives you this mighty blade. The quest tasks you with obtaining a Sturdy Helixhorn as an upgrade material. 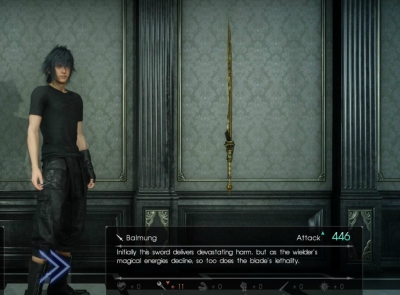 Rounding up weapons made for the game's protagonist, the Balmung is the most potent weapon in his arsenal, with its monstrous stats and a unique ability where it gains bonus damage on each hit depending on how low your mana is.

To get this behemoth of a blade, you have to go to the Steyliff Grove dungeon found in chapter 7, but you have to progress to chapter 15 to be able to find the weapon.

It's located in the second area hidden behind a sealed door. Inside awaits a horde of enemies you have to defeat that are separated by floors. The final level, which features several Tonberries, will drop the Balmung once all enemies are defeated. 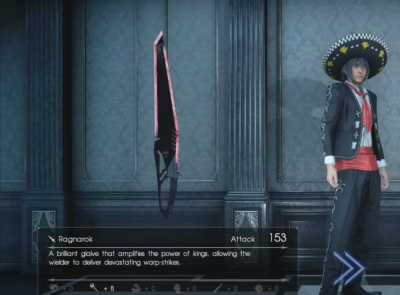 This blade is a fantastic weapon that offers higher damage using a warp strike by taking a longer charge-up time to the original animation.

The weapon is receivable as a DLC reward in the Final Fantasy XV Booster Pack+, and you need to have the Season Pass, making it less grindy to obtain. 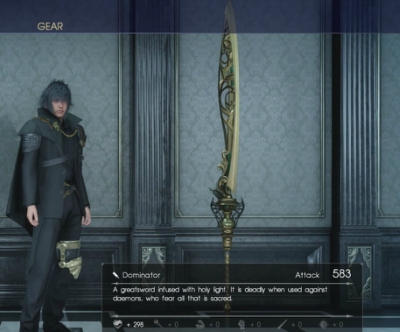 The first greatsword in the list can be acquired in a few different ways during the post-game section. This massive sword features the light element that makes demonic creatures shudder in fear.

You can get this weapon inside buildings north of Alstor Slough, which is located in Duscae, or you can go to post-game sections of the Keycatrich Trench dungeon upon reaching your first camp. 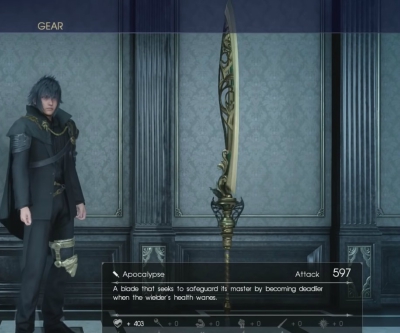 If you enjoy swinging around gigantic blades, then the Apocalypse is the perfect greatsword for you. It also shares the same weapon design as the Dominator, which, if you're a fan of the looks, then it's all good from there.

It's a very generous blade where the lower your health is, the more bonus damage this weapon does, so your enemies have to be wary of attacking you lest they want to be hit for massive chunks of damage.

It located in the Balouve Mines dungeon behind a sealed door that can be opened in post-game after you reach the camp. 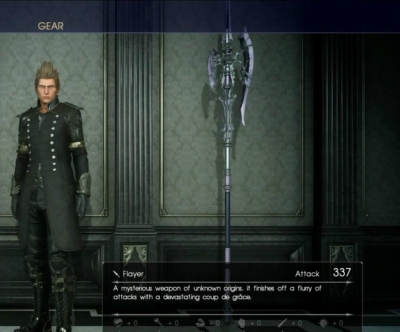 A polearm can be useful to attack your foes with a bit more distance than conventional melee weapons, and the Flayer boasts supreme damage among the other weapons in the category and gives an 80% bonus damage when using finishers.

It is also located in the Steyliff Grove dungeon inside the sealed door, past the area where you found Balmung and situated at the very end of the region. 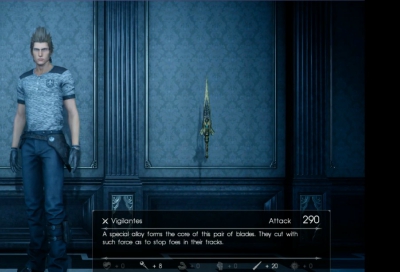 These small, but deadly blades come with a magical effect of applying Stop to enemies they hit, giving you more opportunities to dish out damage while avoiding some to your own.

The daggers can be found in the Glacial Grotto dungeon behind another sealed door that you can unlock, starting from chapter 15. No enemies to defeat, however, as the weapons drop to the floor in the area you make your camp on. 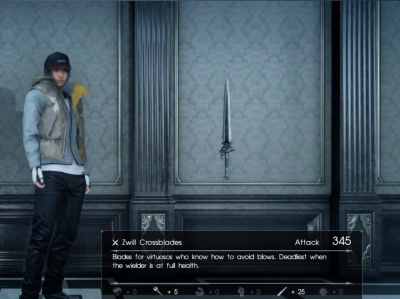 Another set of daggers, the Zwill Crossblade, gives you an enormous boost to your magic as long you maintain full HP.

The sidequest giver Randolph gives a set of quests in the post-game section where you'll have to get to the fifth quest that has you facing off against a boss that may be too challenging even at the max level.

The boss, a Naglfar, sports weaknesses to Fire, Ice, Lightning, and Light but has a resistance to standard-issue weapons, so bear this in mind before going out to slay it. 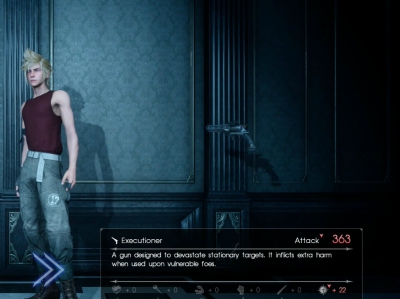 The ranged weapon Executioner, as the name suggests, will fend off your opponents with a unique effect that allows it to deal 50% more damage to secluded enemies, which is perfect for bosses or single encounter monsters like behemoths.

Also located in the Glacial Grotto dungeon, it can be found after chapter 15 behind the sealed door at the very end of the dungeon. 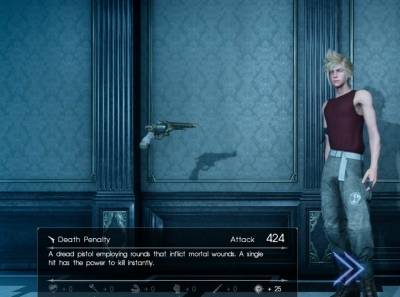 Befitting of its name, the Death Penalty returns in Final Fantasy XV as it has multiple times in the series with the ability to one-hit-kill any enemy it hits 1% of the time.

The post-game section of the Balouve Mines dungeon houses this terrifying weapon where it drops in the last part of the area once you beat the challenging boss fight. 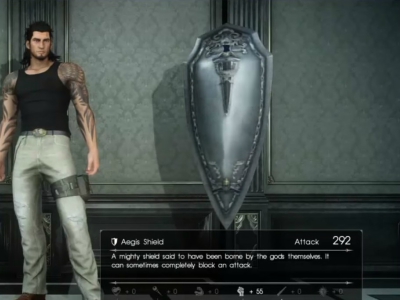 A defensive marvel, the Aegis Shield gives an incredible 10% chance to nullify any damage that comes your way, ensuring you get away scratch-free.

As with all late-game weapons, you need to be in the post-game section and go to the Steyliff Grove dungeon to find it. It can be dropped in the second area of the dungeon at a reasonably common rate, so expect to get this off-hand relatively quickly. 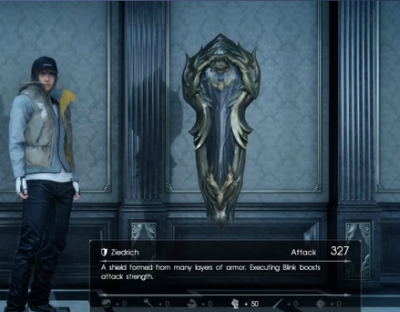 Sporting massive stats, the Ziedrich Shield will give you a bonus of 200 strength for three seconds after each successful blinking.

This is another equipment that is given as a reward from one of Randolph's sidequests, where this can be acquired as the third quest's reward.

The boss fight requires you to kill two Sir Tonberries, which are weak to Dagger type weapons and the Light element but have very powerful attacks, so be wary.

Read Also: Final Fantasy VII Remake Goes Live On PS4: Here's What You Should Know As You Dive In To The World Of Midgar And Begin Your Adventure