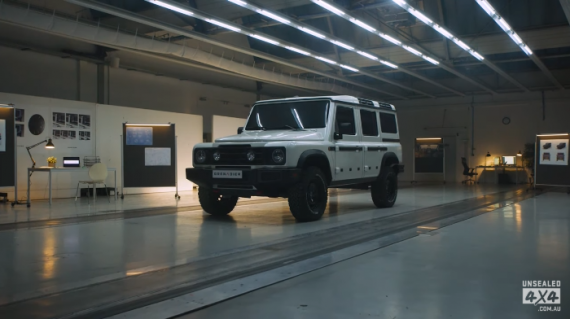 The brand new Ineos Grenadier 2021 is quite similar in size to the latest Mercedes-Benz G-Class. The new vehicle is said to be powered by a particular modular range of a six-cylinder BMW diesel along with petrol engines, it is still quite expected to be priced from almost $50,000 when it finally hits the market sometime late 2021.

The new vehicle is said to be a five-door station wagon along with the upcoming four-door pick-up truck. There might also be a short-wheelbase car to come sometime after along with other different versions.

Although production might take several years to ramp up, a particular insider says that it will still be profitable at a certain annual output of about 25,000.

This car is built in a simple but very well-proportioned and also familiar-looking off-roader with certain straight sides along with a clamshell bonnet that will be rising above the flat-topped front wings, a steep, fairly flat widescreen, and also a flat roof with rain gutters that are running all the way around.

The grille is quite simple and vertical, the LED headlights are also round and the off-roader's large wheels are also positioned to minimize the body overhangs and should take advantage of certain rubberized wheel arches.

Heimann has mentioned that he expects the Grenadier to be quite heavier than the old Defender 110, which is actually narrower but also slightly longer, but that is mostly due to the fact that the Land Rover is still considerably simpler, less well-equipped vehicle along with a much lighter powertrain.

The target weight is said to be around 2,400kg, but the current initial prototypes are still heavier by 80kg. The weight will still be reduced in order to improve the Ineos Grenadier 2021's all-important off-road performance.

Ineo's own engine choice is the familiar BMW B57/B58 family so that each Grenadier will actually have modular 3.0-liter petrol or maybe diesel straight-six that eventually sens its drive through a new ZF-supplied eight-speed automatic gearbox (and also a separate low-range transfer case).

Depending on the given specs, these particular engines make anything from a simple 261bhp to a strong 400bhp in their own BMW applications.

Both Tennant and Heilmann have said that the project is running only just a few weeks behind despite the whole global crisis caused by the ongoing Covid-19 pandemic, and they are actually now looking for ways of getting that whole time back.

According to Heilmann, it is still a very tight schedule and that in 2021, they still want to be the very first ones to do their production run. It was also mentioned that by the end of 2021, they should be able to have production cars coming to markets.

Luxury Car Sales Are Soaring up to 80% in Australia: Check out the Best Sellers Here

The world is in turmoil right now and the automotive industry has taken a huge hit. Analysts estimate certain markets are going to record low numbers comparable to figures posted over 30 years ago.

The engineers of the new generation 2021 BMW M3 and M4 did not make it any easier when they also brought an F82 M4 to the track for the prototype test drive of the new M brothers.

Mercedes Benz Partners with Nvidia Towards Better Autonomous Vehicles by 2024: Could They Beat Their Competitors?

What makes the Mercedes Benz and Nvidia partnership autonomous driving better than the rest?

US Is No Longer The Top Market for BMWs And Porsches: Guess Where [Hint: Not Europe]

The economy in Korea is growing to the point that there is a sharp increase in demand for premium and luxury cars- one of which is BMW and even Porsche.