Earlier this year, Shawn Davis, a man living in Illinois, had some cute unexpected visitors that started hanging around his backyard. 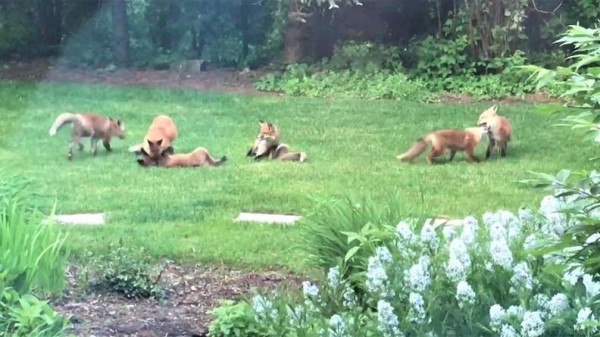 The visitors of his backyard composed of a family of local foxes, and they made themselves comfortable as if the yard was their home.

The Visiting Family of Foxes

The visits from the fox family started a sunny day in May, which was when Davis discovered that there were a few young foxes that were hanging around by his patio. It was a shock to Davis when he encountered them initially.

Davis has never seen a young fox ever before in his life, and it surprised him to discover that they were in his backyard, which is a surprise because they live right in the center of a residential area.

The young foxes seemed to have enjoyed their first visit, which most likely led the young foxes to tell their entire family about the amazing backyard they found.

Davis started to see even more foxes after the first visit from the young foxes. The visits became something that happened regularly.

The family comprises a father, mother, and five children. The fox family began visiting almost every day to relax and rest, and they also played amongst themselves.

Davis said that his backyard was secluded and private, which most likely made the fox family feel safe when they were there. In the morning, the foxes would curl up and sleep under the shade of the trees. Then during the rest of the day, they would be playing.

Davis and the rest of his family enjoyed watching the visiting fox family, which made him start recording them so people online would be able to enjoy the adorable visitors.

The pandemic has made it so that Davis and his family had to stay indoors, but the visiting fox family turned into a highlight of him and his family's days.

For Davis, the fox family loved to put on a show for him and his family. Davis didn't realize that foxes could be as playful as he witnessed them being, which made him consider foxes to be "very cute little critters."

Read More: [Viral Video] After All the Controversy Over the Coronavirus, Wuhan China Plans to Build the Tallest Skyscraper Ever

The Fox Family's Visits Have Been Dwindling Down

However, as time went on, the young foxes started to gain independence. This growth has made it so that the fox family visited Davis' backyard less frequently.

But that might mean that if the young foxes start their own families, they might bring their families to Davis' backyard. The backyard might become a fox sanctuary for foxes to rest, relax, and play.

Davis and his family miss seeing the visiting family of foxes, and they hope that they return soon since they all had a great experience watching them in the backyard.

What would you do if you discovered that your backyard had become a second home to a fox family?

A certain reporter from the Philippines was able to keep her cool while both of her cats had a huge fight right behind her as she was reporting live during a TV interview.

A shocking event took place live in Spain as a TV news anchor was caught due to a semi-naked female journalist in the background. His girlfriend responds to this scandal.

A recent 3D simulator was developed to show people the dangers of not following the guidelines of social distancing to avoid the coronavirus. especially in the supermarket.