Scientist Turns Himself Into Human Cyborg to Overcome MND 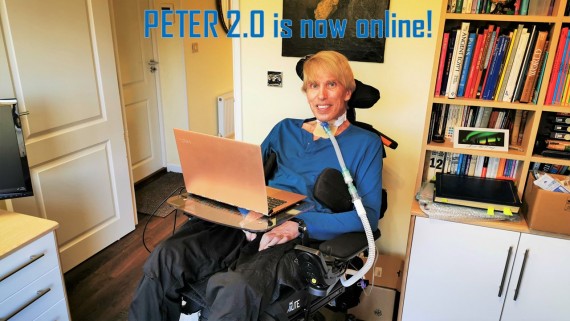 This scientist is turning himself into a human cyborg as he fights his terminal illness.

Peter Scott-Morgan is the subject of a documentary recently shown on Channel 4. The documentary chronicles the scientist's journey to beat his Motor Neurone Disease by turning himself into a cyborg.

The documentary took two years to film as it followed Peter's journey into becoming the world's first human cyborg. In the film, he said that he wanted to be a human guinea pig as we witness how far people can turn science fiction into a reality.

Since 2017, Peter Scott-Morgan has been battling MND, a terminal illness that affects cells in the spinal cord and brain. Sadly, there is no cure for this muscle-wasting condition. About half of the people diagnosed with this disease live about three years from the symptoms' onset. For Peter, he was told he only had two years to live.

Yet, Peter is not the kind who would simply accept his fate like that. He turned to science and used his expertise in robotics to fight his condition. He began by undergoing three surgeries in 2018. The procedure re-plumbed his stomach; hence, he no longer needs a carer when eating or going to the bathroom.

NOW REPLUMBED AS A CYBORG four tubes will keep me alive long after I become fully paralysed (apart from my eyes, which will still move). My body’s sole function will then be to sustain my brain. This first transition has not been so much based on Medical Science as Engineering. pic.twitter.com/AqkeMwnQ4I — Dr Peter B Scott-Morgan (@DrScottMorgan) November 13, 2019

Check this out: Robot Cleaners Armed with UV Light Help Keep a School Safe for Returning Students and Teachers

After that, he again underwent a medical procedure that would separate his trachea and esophagus. That would procedure would prevent him from drowning in his saliva as the condition progress. That also meant removing his voice box; his voice lost forever.

Just home from 24 days in Intensive Care. All medical procedures now complete and a huge success. My mini-ventilator keeping me breathing is a LOT quieter than Darth Vader’s. All speech is synthetic but at last sounds like me again. Long research road ahead but in great spirits. pic.twitter.com/JPjwjagDLT — Dr Peter B Scott-Morgan (@DrScottMorgan) November 11, 2019

In his Tweeter post, he shared his thoughts before the procedure. "THIS IS MY LAST POST," he wrote, "as Peter 1.0." "Tomorrow, I trade my voice for potentially decades of life as we complete the final medical procedure for my transition to Full Cyborg, the month I was told statistically I would be dead." He ended his post with this message -" I'm not dying, I'm transforming! Oh, how I LOVE Science!!!"

THIS IS MY LAST POST as Peter 1.0. Tomorrow I trade my voice for potentially decades of life as we complete the final medical procedure for my transition to Full Cyborg, the month I was told statistically I would be dead. I’m not dying, I’m transforming! Oh, how I LOVE Science!!! pic.twitter.com/xCO17ph0lp — Dr Peter B Scott-Morgan (@DrScottMorgan) October 9, 2019

Saving his voice so he won't feel isolated

Still, he had everything planned even before he went under the knife. He spent countless hours recording about 2,000 words so that he could at least be able to speak digitally. It was the same technology that the late Stephen Hawkings used. He said that he still wants to sound a bit like how he used to even when he is already "locked in." He wanted to be able to convey some of the emotions and gain some empathy from fellow sufferers. Without that ability, he said he would be "very, very isolated."

One of the touching moments in the film was when he got to hear his digitized voice, not speaking, but singing "Pure Imagination."

For now, Peter communicates by typing the words through his eyes. He uses a technology that can track his pupils' movements, enabling him to operate the machine to speak out his thoughts.

Peter, working with AI and robotics experts, created an AI system that will allow him to control an avatar that programmed to speak his voice using his eyes. The technology will use a laptop and an eye tracker, among other devices.

Beyond extending his life and improving his quality of life, Peter wants to be an inspiration for other people who are also "trapped" in a body that's stripped of its ability to move. Hopefully, in the future, people suffering from MND will also benefit from this technology.

Director Rick Famuyiwa of the upcoming "The Flash" movie has been teasing fans on Twitter with posts hinting at the idea of Cyborg joining Flash in the 2018 film.

Artist who sees world in grey scale uses an "eyeborg" to hear colors.

In a YouTube video teaser, Beyonce wears the Single Ladies cyborg glove: her alter ego, Sasha Fierce, is back