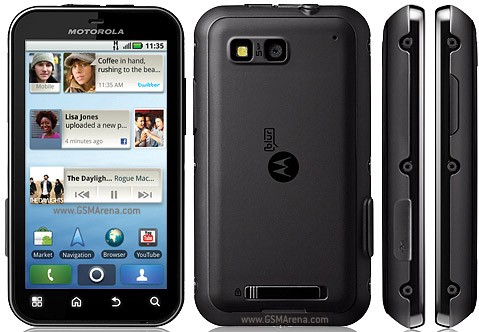 The Motorola Defy wasn't really the phone you'd excitedly fall in line for when it first launched. At the time, it was a really capable phone. It's not a flagship type, but it's definitely not an entry-level model as well. It had a 3.7-inch TFT display surrounded by a 107mm long and 13mm thick body. Its 854 x 480 screen was also protected by Gorilla Glass coating making it more resistant to the occasional scratches and bruises.

Back when it first became available to consumers, the Motorola Defy had internal specs that are good enough for the average user. It had an OMAP chipset with 512MB RAM. Running it was Google's slowly growing Android 2.1.

However, despite all these mediocre features for the time, the Defy had one groundbreaking feature. It was the first Android phone to have water resistance.

Motorola Defy: How did it achieve water resistance?

Electronics and water aren't usually the best of friends. As much as possible, the former always tries to stay away from the latter. However, when it comes to mobile devices, there are really some instances that your phone cannot avoid getting wet or worse, totally submerged in water.

Remember the time it rained heavily and you were a bit scared that your phone might've been wet because your pockets are? How about that time when you excitedly jumped to the pool only to remember afterwards that you brought your phone with you for a swim? Today, many of us don't bother at all with getting our phones wet or submerged especially if it's just for a short amount of time.

Back in the day, manufacturers raced to provide water-resistant devices. Some focused on making phones for gaming or as dedicated-camera replacements, but Motorola aimed to solve one basic problem of owning a mobile phone. It's still a bit delicate. Consumers needed something more robust. And Motorola gave the world the Motorola Defy.

To be exact, it had an IP67 rating. This means, that the phone can be submerged in a meter of water for up to thirty minutes without the risk of water getting inside the device. Motorola was able to achieve this by using practical solutions. They fitted the audio jack hole and USB port with rubber plugs. Bear in mind though that for the water resistance to work, these plugs should be properly inserted. The removable backplate was sealed tight to avoid dust and moisture from seeping through.

Motorola's approach then was, objectively, quite simple. It did deliver the results though as many phone manufacturers soon launched their own models that featured water resistance. Sony Ericsson launched its Experia Active while Samsung debuted its Xcover series.

Water resistance is now a standard feature for most phones, especially for flagship models. Manufacturers have gone far in providing the best solutions. Having non-removable covers means that the entire device is solid and rigid. Water-resistant coatings and adhesives are also being used to further improve the water resistance of modern-day devices.

For all of these, we have no phone to thank but the Motorola Defy.

The Xiaomi Mi 10 Ultra marks the company’s 10th anniversary. And what better way to celebrate this by making one of the best phones — that we cannot buy just yet.

Here is the full list of supported devices for receiving Android 8.0 Oreo update from Motorola.

Prolific tipster Evan Blass tweets the image of a Motorola phone carrying Android One logo on its back.