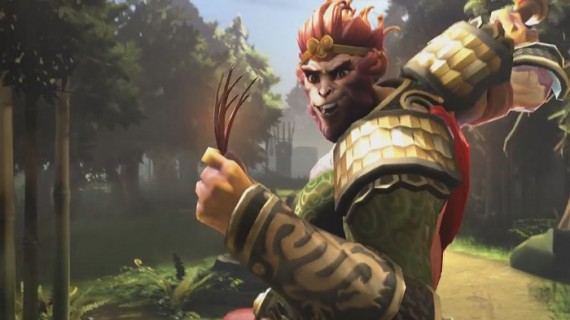 Lots of exciting things have arrived to DotA 2 recently. The much awaited Underlord (known as Pit Lord in the first installment) was introduced along with some interesting features. And yet, the hype doesn't stop there. A brand new character, or hero in a sense, by the name of Monkey King is expected to be unleashed. While the waiting process continues, here's everything we know about this dude in a nutshell.

According to PC Gamer, the upcoming DotA 2 hero Monkey King -- also known as Sun Wukong -- was already been teased several years ago even in the first title. In fact, if players were observant enough, they should've noticed those deluge of bananas during the recent test updates. After all, monkeys and banana coexist with each other, right?

Well, this is not really a secret to the DotA 2 community as a whole. But for those who have no concrete knowledge about its release date, Monkey King will invade the game's jungle come Fall this year. The hero will be part of the forthcoming The New Journey update.

Why It's Called DotA 2 The New Journey Update

Obviously, the arrival of Monkey King in DotA 2 will present a new journey. But actually, there's a reason why Valve chose such. Basically, the hero hails its origins in Journey, concluding his adventure to the West. So yeah, the name of the update wasn't just something that appeared out of the blue.

As of this writing, the hero's overall ability in DotA 2 hasn't been revealed. It remains to be a mystery, as no revelation of such was made. However, Monkey King is believed to be an expert when it comes to Martial Arts (or at least as what the trailer showcases). He also has the ability to summon illusions, giving his enemies a hard time in the battlefield. Moreover, he is also equipped with a skill similar to that of Treant Protector's, and can throw a lance or something to stun enemies. He can disguise himself as a tree, giving him the ability to surprise an opponent at point blank. Simply put, he's a Phantom Lancer mixed with Treat Protector.

What are your thoughts about the new DotA 2 hero? Are you also excited to use Monkey King? Let us know what you think at the comment section below!

The much awaited DotA 2 update called The Dark Rift has arrived. Thanks to it, the Underlord is now part of the game's hero roster.

Is your "Dota 2" MMR "too ez?" If you want to climb to the top, then follow these tips!

Why The CS:GO eSports Scene Is Not Happy With Valve's New Rule

Valve has implemented a new rule on every CS: GO pro tournament. Find out why the eSports scene is not entirely happy about it.