How Apple Can Improve The iPhone 7's Wireless Airpods 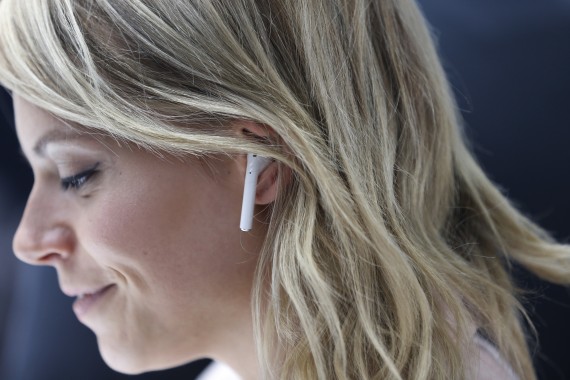 Apple fans are not impressed with iPhone 7's new wireless AirPods. Luckily, there are ways to improve it and keep user happy. (Photo : Justin Sullivan/Getty Images)

Apple fans seemed excited at the thought that the Cupertino-based tech giant is releasing a wireless headphone. As soon as the Apple AirPods were released, consumers weren't all that pleased. Some users have cited a few flaws and they hope that Apple will exert some effort to improve it.

Apple fans are divided when they saw the new AirPods. Some users think that it looks cool and handy, but others were more worried about it staying in their ears as they move around. What if it falls out? it's actually a good question considering the Apple AirPods will not function if its other half is not sitting on the user's ear.

While it is quite impressive to know that it can tell whether both the AirPods are resting on your ear canal, what's not impressive though is that when you lose one of the AirPods - you can never use it anymore. In shorter terms, it's useless and you need to buy yourself another pair. Hopefully, they will find it in their hearts to improve or come up with a new design for the Apple AirPods that looks like an unreliable high tech hearing aid.

Apple CEO Tim Cook addressed concerns about the AirPods falling out of the user's ear. Cook assured Apple fans that no matter what we do, the AirPods will not fall out from our ears. Since Apple CEO Tim Cook is confident about the AirPods, there are still circumstances beyond what users can control. The Apple AirPods are two tiny earbuds that we can easily lose especially if we misplace it. Having said that, if you lose one of the AirPods or both you need to buy them and it's not cheap. The Apple AirPods are priced at $160 and it may slightly be worth it, if you think otherwise you can always opt for cheaper alternative wireless headphones.

Apple AirPods May Be Your Only Choice

Apple fans who do not like the AirPods can always opt for the Lightning earpods; But according to a report published on Mashable, the lightning earpods are acting up when you connect it to the iPhone 7 which leaves Apple's users settling for the Apple AirPods instead. Then again, if you really can't stand the Apple AirPods, you can always find alternative wireless headphones that are more affordable yet fully functional.

Apple has not released any statements or explanation as to why this is happening. They are still probably figuring this out along with the hissgate bug in the iPhone 7.

Further Proof The Nintendo NX Will Be A Hybrid Device

Though it is not coming from Nintendo directly, the public can start to settle on the image of the Nintendo NX as a hybrid console, thanks to a “Pokemon” executive.

For what could arguably be the first time, the iPad finally has real competition in the upcoming Microsoft Surface Pro 5, which is expected to arrive in March 2017.

First announced in May, Google is fulfilling a promise that will provide users with a messaging app that is sure to give current service providers a run for their money.