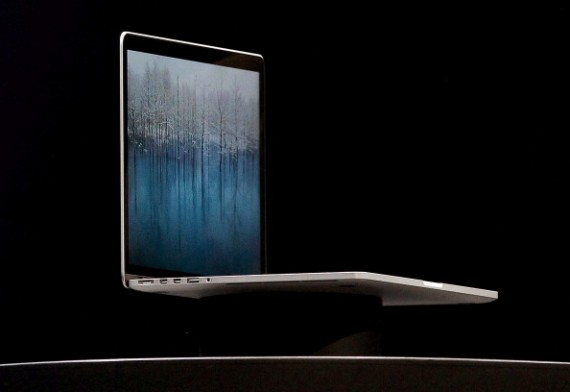 The 2016 MacBook Pro is going to be launched soon. If you need a reason to buy it, here's 4. (Photo : Justin Sullivan/Getty Images)

The 2016 MacBook Pro is one of the most anticipated devices by Apple. The new laptop may arrive before October ends, but is there an urgent reason to buy it? Well, yes. And here's four.

The 2016 MacBook Pro will reportedly sport the latest Intel Skylake processor, which was first seen in its cousin, the 2016 12-inch MacBook launched earlier this year. Consequently, this would mean a better and faster performance. Apple promised a 25 percent increase in speed on the latest 12-inch MacBook, so the new chip is expected to deliver the same boost on the upcoming 2016 MacBook Pro.

This would also pave the way for added features on the 2016 MacBook Pro that may require a more powerful chip, opening up a huge array of possibilities for the innovative company.

The Intel Skylake processor would also bring about a longer battery life. It was previously reported that it requires less power to operate, which means that the 2016 MacBook Pro would stay on for much longer on the same amount of battery. Of course, this does not mean that the battery juice will not be bumped up. There's a chance that the Cupertino-based company will refresh the capacity as well.

Think of the sleekness of the 12-inch MacBook and imagine that on the 2016 MacBook Pro. According to KGI Securities Analyst Ming-Chi Kuo, who is known for his accurate predictions, we should see a thinner and lighter Pro this year. On top of that, or inside of it rather, is a flatter keyboard as per the sources of Bloomberg.

The 2016 MacBook Pro may thread dangerously close to the MacBook Air's measurements, which is not a good thing for the latter. On the other hand, the smaller 12-inch laptop is still expected to hold the crown when it comes to thinness and weight.

The OLED touch bar, if true, is an absolute game changer. It is a panel that will reportedly sit atop the keyboard, replacing the function keys. The same sources stated that the "Dynamic Function Row," as it is internally called, will have different functions it can perform depending on the program being used.

For example, if the user is using Safari on the 2016 MacBook Pro, the panel will display controls to find and define terms. When the user is on the iMovie video editor, a more precise volume toggle will be displayed. The default state of the OLED touch bar shows the original functions of the function keys, such as media controls.

If this rumor proves to be true, then Apple will have a winner on its hands once the 2016 MacBook Pro has been announced. As of now, it is believed that it will be revealed on Oct. 27 alongside a new iMac with the ultra-powerful Intel Kaby Lake processor. There are also talks of a MacBook Air refresh happening on the said date, but it is unconfirmed for now. For now, we can only wait until the event to see the improvements.

MacBook vs Razer Blade Stealth vs Asus ZenBook 3: Which 12-inch Laptop Should You Buy?

Here we take the newly updated Razer Blade Stealth against the ZenBook 3 and MacBook. Which is the ultimate 12-inch Ultrabook?

Your MacBook Will Automatically Download Sierra; Here's How to Stop It

What to do to stop automatic download and how to delete the macOS Sierra installer.

A 27-inch iMac pops up on Best Buy with Intel Kaby Lake processor in tow.