2016 MacBook Pro Specs And Features: The Necessary And The Theatric 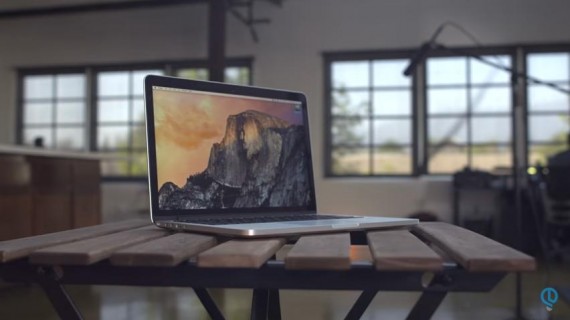 Because Apple has not released an official statement for the 2016 MacBook Pro, only rumors of the unit are making headlines, some of which would be ideal for the upcoming device, while others are better as stage smoke. (Photo : Jonathan Morrison/YouTube)

For the past few days, the internet has been abuzz with news about the upcoming 2016 MacBook Pro. Many speculate that the unit will be revealed before the end of the month, along with several new features and upgrades from the reigning MacBook Pro. And while some of the features that have been reported are innovative and exciting, there are those that seem little too out there from certain angles.

As BGR notes, a Reddit thread that was started by a user named "Foxconninsider" started to gain traction on Wednesday morning. The post claimed that the user had seen a demo by Foxconn, which is one of Apple's main manufacturing partners. During the demo, the company reportedly laid out two pieces of technology, which will make it onto the 2016 MacBook Pro.

The first of these is a "new MacBook keyboard module," also known as the OLED function key panel which has been making its rounds online. The other reported item was a new "Magic Keyboard" that, like the OLED function key panel, would morph different features depending on the current application used. Theoretically, the keys would change depending on the user's needs and preferences.

Naturally, these two changes will be met with both awe and doubt. The OLED function key panel, which should rest above the standard keys, are supposed to be customizable and will generally improve the 2016 MacBook Pro experience. The Magic Keyboard is meant to be the same way but in a larger scale.

For example, if users were simply browsing the web, the function key would hold buttons for refreshing or going back a page. Likewise, the Magic Keyboard might hold a button that will go directly to the search bar. And while, after some practice, the new technology might save time and effort, but it is definitely not a necessity.

This technology has actually been introduced to the market before, as Cult Of Mac notes. That is, Lenovo released a notebook which also had a row of function keys that would change depending on the application or program offered. However, most users called the feature a mere gimmick and the practice never really gained any ground.

Another aspect that might pose as a problem is that a continuously morphing keyboard will not be easy to keep in mind. What this means is that the standard keyboard has been engrained in majority of the public's heads and there is a comfort and ease in that. However, an adapting keyboard will require users to constantly look down and find the necessary button or feature.

In addition, because the keyboard will be specific for every program and app found on the 2016 MacBook Pro- at least, theoretically - Apple will need third party developers to produce an entirely new connection with the specific product. This is not going to be an easy feat for the tech giant, no matter how much pull it still has on the industry. However, it is also possible that the Magic Keyboard will only show its colors for built-in Apple products.

Granted, it might not be that way for Apple's 2016 MacBook at all. The Cupertino-based company does, after all, have a way with making unheard of or unpopular innovations work for the general market. Perhaps the tech giant has figured out a way to make the morphing keys more enjoyable and more efficient to use.

Foxconn reportedly had a event at one of China’s most prestigious tech schools, where it showcased the newest technology that it would incorporate into Apple's 2016 MacBook Pro.

The rumor mill for the Surface Pro 5 is a little contradictory at this point. While reports have been pointing towards a 2016 release, the specs that are being stated are at this point still unavailable in the market.

The 2016 MacBook Pro is no doubt a premium laptop released last year, but struggles a little bit with battery life. Here are some tips to make it last throughout the day.