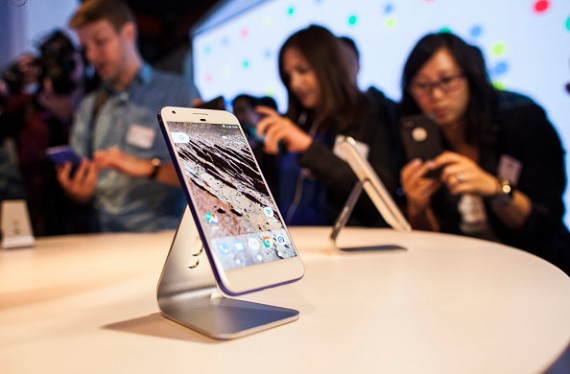 Google’s newest line of smartphones, the Pixel and Pixel XL, has been praised by customers and tech experts alike, since its release. (Photo : Ramin Talaie/Getty Images)

Google's Pixel and Pixel XL newly launched smartphones are offering prospective buyers an excellent alternative to Samsung's recalled Galaxy Note 7. The premium handsets from Google might be the perfect mobile devices to fill the gap left on the smartphone market by the unexpected departure of Samsung's flagship phone.

Pixel and Pixel XL, Google's new smartphones, offer an opportunity almost too good to be true for those Android users who were mildly curious about other Android alternatives but went for Samsung's Galaxy Note 7 anyway. However, the new Google mobile devices will not be accessible to anyone.

Google sells its Pixel smartphones in only a few markets. According to the website gadgets.ndtv.com, there won't be a worldwide launch, as Samsung Galaxy Note 7 was going to get. Sales of Pixel and Pixel XL will be relatively small, market analysts expecting around 3-4 million units of the two Google new mobile device combined.

Of course, is not going to be easy for Google to attract Samsung's customers who previously invested in a Galaxy Note 7. Eventual comparisons between Note 7 and the Pixel line may point out that Google's mobile devices are good but nowhere as outstanding as the now-defunct Samsung smartphone. Other customers will be turned off by the lack of the popular S Pen stylus, then there will be those who will be disappointed by missing Optical Image Stabilization (OIS) in Google's Pixel line.

Even those customers who buy the new Google Pixel smartphones will have to go through the learning curve to the new Pixel-only features. But even with the learning curve with Pixel Launcher and Google Assistant and lack of a stylus and OIS, Google's new Pixel line has a rare opportunity to become a success.

According to TechTimes, the new Google Pixel and Pixel XL mobile devices will run the full range of features offered by the upcoming Android 7.1 Nougat. The company's new signature models will fully enjoy the Google OS upgrade. This will provide the Pixel line with a unique appeal.

Among the features exclusive to Android 7.1 Nougat for the Google Pixel flagship smartphones is included support for the Google Daydream VR. According to Google, the Pixel and Pixel XL are smartphones built with virtual reality capabilities, allowing for an immersive 3D experience of sporting events, concerts, and movies.

Another top feature of the Google Pixel flagships is their camera, considered by the tech experts as the best so far in the mobile phone industry. Android 7.1 Nougat supports many Pixel Camera app features, including the default HDR+, which promises "zero shutter lag," according to The Verge. Another Pixel app supported feature is Smart Burst that uses artificial intelligence to choose the best out of a series of shots.

Smart Storage is a feature that will automatically remove videos and photos already saved in the Google Photos cloud storage because the Pixel phones to come with support for a microSD card that would allow memory expansion. Google's Pixel and Pixel XL smartphones will come with the Pixel Launcher unique home screen that is exclusive to the Pixel Line. The feature will include the circular app icons and new home screen shortcuts.

Huawei will launch next month its Mate 9 line of flagship smartphones composed of two models.

Rumors Claim That Google Will Not Launch Any Nexus 2016 Phone

According to rumors, it seems that Google will replace this year its Nexus line with the Pixel line of phones.