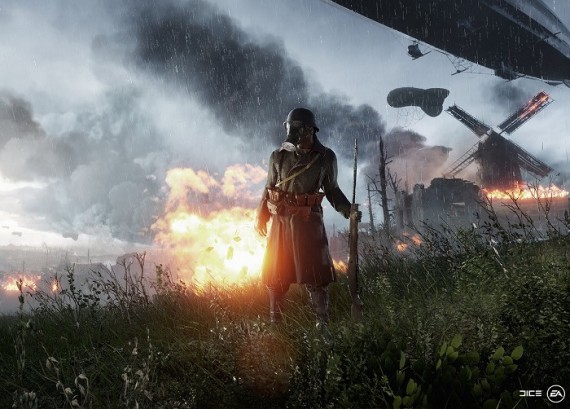 Battlefield 1 will provide gamers with a novel shooter experience thanks to its World War I-inspired gaming environment. (Photo : Howlmighty/YouTube)

The Battlefield series has taken us to Vietnam, to World War II, to wars of the modern times, and even wars happening in the far-fetched future. But instead of a more advanced war game, DICE took a step back by releasing a new instalment that will bring players to World War I. Releasing a game with this new setting is a bold move for EA DICE, but it's also the main reason why Battlefield 1 stands apart from the crowd of Battlefield games that is available now.

A Breath Of Fresh Air

Battles in modern settings or into the far future are normal. However, having a World War I setting for Battlefield 1 is a breath of fresh air for most gamers. WWI is a global conflict that is seldom used as a shooter genre. Instead of the destructible environments with massive modern changes just like in Battlefield 4, no big features can be attached to Battlefield 1.

The uniqueness and authenticity of Battlefield 1 lie on the fact that the game took a step backwards in design and the setting of the battle's era.  The Battlefield 1's gaming environment is so compelling that you will think that this is how World War I really looked like. From the bombed-out towns to shifting deserts to muddy trenches laden with barbed wire, DICE definitely went all out with Battlefield 1's visuals to make its gaming environment even more realistic.

Even so, Battlefield 1 is not very different from other Battlefield series. There are still several modes to play, elite weapons to be found, and Behemoth vehicles that is typical in any combat system. On the other hand, since we play with the World War I era as the major setting, using the weapons can be a bit difficult. Planes are less agile to maneuver. Tanks have slower paces. Guns take time to reload and they do not have that much range when used.

Dying too fast and taking a very slow pace into the game is one thing that not all gamers might appreciate in single player mode but may be easier when done in multiplayer matches. Battlefield 1 offers a series of adventures that are not just worthy of gameplay, but also of its memorable storytelling.

In short, DICE made everything possible to make the feel of the World War I period in Battlefield 1 very much authentic for players.

Some of the most notable additions to the gameplay are the Elite Weapons Classes and Behemoth Vehicles. Behemoth Vehicles help losing teams in multiplayer matches even the odds with the help of armoured trains, flying zeppelins and warships. Each vehicle is map-specific and is not immune to destruction. There are horses as vehicles too. However, they are not as cool to use in battles compared to planes and war tanks.

Players also have the choice of Elite Weapons Classes that can be as simple as a flamethrower or more powerful rifles. Just like with the Behemoth Vehicles, the Weapons Classes depend on where you are on the game. If you are in luck, special weapons can also be found on each map. A unique collection of weapons are available like mini-pistols and double-barrel SMGs. Of course, the weapons lack the thermal sensors or holographic sights that come with more futuristic shooter games. It makes Battlefield 1 really realistic but it also makes reaching the top tough to do.

In terms of modes, Battlefield 1 has some of the familiar staples like Conquest, Team Deathmatch, Dominion and Rush. A new mode, War Pigeons, is also a realistic nod to the WWI battle where players must retrieve and release pigeons to send messages to other players.

Similar to other Battlefield instalments, Battlefield 1 is divided into six "war stories," which is about an hour or an hour and a half each depending on the type of mission. Harlem Hellfighter, the famous black infantry regiment during World War I, takes the lead as the prologue of the game. The other missions depend on the character, location, and type of fighting that players want to participate in. Players can choose to be an American pilot, an Arabian assassin, an Australian "runner", a British tank driver, or an Italian heavy gunner.

Each story lasts with four missions except the Italian war story with only two missions and can be played in any order. Dying would suck, though. If you die in one of the missions, you will have to do the entire sequence of the mission again. Levelling up is painfully slow, a serious setback especially for gamers who want to finish their missions fast.

In more ways than one, Battlefield 1 is not a disappointment to gamers who are looking for something new, other than modern shooter games nowadays. The game itself is brilliant, is less ambitious in comparison to other instalments, is packed with gorgeous visuals, and has plenty of battles to play with. It is a refreshing concept, which is a novelty actually, that gamers should try.

It is also a bold move for DICE to turn left when everybody else is going right with their shooter games. It is still early to say if Battlefield 1 will hit it high or low but for now, gamers can be sure that the playing Battlefield 1 will be a combination of great challenge and novel fun.

Since its release, No Man’s Sky has been drowned in controversies but an analysis from 3DGameDevBlog shows that the game’s procedural technology is great and fantastic. The only problem? No Man’s Sky was clearly rushed for release according to analysis.

Thanks to an attentive fan, gamers who wait for the official release of Battlefield 1 has two more modes to look forward to, the Hardcore Multiplayer and Fog of War Modes.

Call of Duty: Infinite Warfare Beta Gets Another 24 Hours

Instead of its deadline today, Oct. 17, the Call of Duty: Infinite Warfare beta is given another 24 hours for gamers to enjoy following issues on the server and matchmaking within the game.

Battlefield 1: In The Name Of The Tsar: Lupkow Pass Map Coming In August; Gameplay Unveiled

A new gameplay trailer for Battlefield 1: In the Name of the Tsar was recently unveiled. It featured a new map, the Lupkow Pass and other additions to the game.