WikiLeaks And The 2016 US Presidential Elections: Why America Seems Intent On Silencing Julian Assange 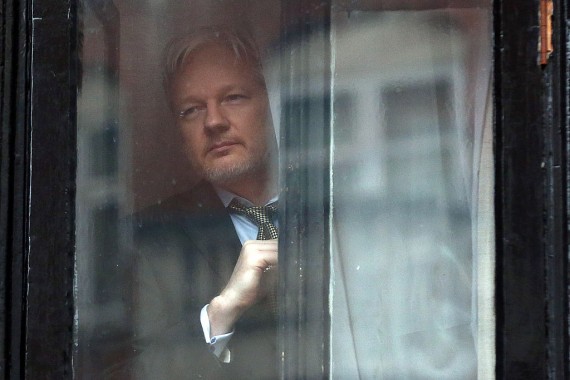 If Julian Assange really has nothing to show for, why does it seem like the U.S. is doing everything it can to silence him?<br /> (Photo : Photo by Carl Court/Getty Images)

Although the U.S. presidential elections started as one of the most controversial of all time since Donald Trump was elected as the Republican nominee, the scandal raised to a whole new level when the whistleblowing organization WikiLeaks released a batch of emails from Hillary Clinton´s campaign chairman John Podesta. This divided the nation into those who endorsed its leader Julian Assange, and those who claimed that he was interfering with the election.

Soon after the first leaks, the U.S. accused Assange of working with Russia, and since that moment, nothing was the same again. The WikiLeaks leader promised to release every single document regarding the presidential election before November 8. Some published documents revealed the link between Clinton and Goldman Sachs, and suddenly, the Ecuadorean embassy sabotaged Assange´s internet, seemingly in an attempt to protect the elections.

Opposite Positions Regarding WikiLeaks And The Presidential Elections

However, what has been rising beneath all of these events has been the U.S. government's intentions to silence the radical transparency organization, and the position that American media, society and politicians have taken regarding this action. This eventually resulted in efforts to discredit Assange´s leaks because of his sexual abuse accusations, or endorsing his mission of making people know the truth behind politics.

The delicate fact about this situation is that both positions also correspond to different political interests, which makes these reactions as a non-objective response. For example, it is no accident that most of those who support WikiLeaks have openly shown their support to Donald Trump to the presidential elections, and those who question Assange´s actions - including the American government - want Clinton to be new U.S. Chief of State.

As reported by The Guardian, two conservatives figures in the form of Sean Hannity, the Fox News personality and David Duke, a former Ku Klux Klan grand wizard and senate candidate for Louisiana, have praised Assange by calling him a "Hero." Hannity and Duke have also supported WikiLeaks for having "done the U.S.A. a great service" by exposing "government corruption" and cybersecurity weaknesses.

On the other hand, many liberals, who ironically also praised the non-profit organization in its first leaks back in 2010, have positioned themselves against WikiLeaks. It is almost impossible to separate this stance from their political view, considering that they openly support the Democratic nominee. In fact, many people and media whose points of view of the presidential elections are very clear have used Assange´s sex accusations to discredit the leaked documents, as reported by Belling Cat.

The issue about having an unquestionable answer is that both those who support and reject the organization have a point, regardless their political positions. For example, it is impossible to deny that WikiLeaks is interfering with the election, giving the fact that the leaks are destroying a candidate´s image, thereby giving the other a bigger chance of becoming the new president.

This is not the same as the media publishing something hidden that no one didn't know about, because these are private and confidential files, which makes its release an illegal action. However, the problem is that regardless of the illegitimacy, the documents could be real details about someone who´s about to become the U.S. president, and for many, the American people need to know to about it.

But there´s another twist in this reasoning: the fact that WikiLeaks haven't published hacked emails from both nominees, but from only one, makes its actions as a clear attempt to benefit a candidate, even if it's showing real facts that need to be known.

This situation makes the U.S. government's actions to silence the organization as something that could be easily considered as an effort to protect the presidential elections´ transparency, or an attempt to uncover a candidate´s flaws. It seems that both options are right and wrong depending which candidate you support.

Was the United States behind the internet shutdown of WikiLeaks founder Julian Assange?

Julian Assange now will have to face the enemy from the inside, as it remains unknown which are the Ecuador´s motivations behind the sabotage.

If its proved that a state actor sabotaged Assange´s internet connection, this could unpredictable consequences.

The US Marines prepare for a more futuristic warfare as they have been secretly testing robot soldiers and hypersubs for the past few weeks. These new machines were evaluated on how they perform in realistic scenarios.

After surpassing Ford's market value on Monday, Tesla now inches closer to GM's top spot as most valuable US car company. The popular and fast rising company still continues to rise as profits are projected to rise some more despite some criticism over its value.